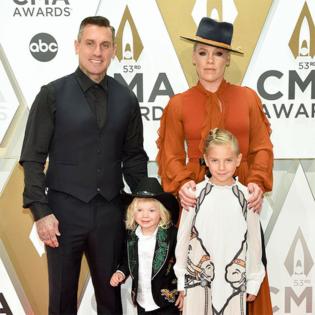 Pink's son picks flowers for her "every single day".

The 41-year-old singer has nine-year-old daughter Willow and four-year-old son Jameson with her husband Carey Hart, and has said her home life is pretty relaxed as no-one in her family thinks she's a "big deal".

But Pink does have a number one fan in her son, who calls her "beautiful" and loves to give her flowers.

She gushed: "At home, no-one thinks I'm a big deal. Jameson is a charmer, he picks me a flower every single day! The other day I put on this dress to wear for dinner because I dress up at home now. He goes, 'Come on now, what am I dreaming? You look so beautiful!' And I was like, 'Say it again for the people at the back!' "

The 'So What' singer also revealed her daughter is starting to pick up on her mother's star status as she recently asked if she's "rich".

Speaking on Hits Radio Breakfast with Fleur East, she quipped: "Willow asked me the other day, she goes, 'Am I rich?', and I said, 'No, you're borderline homeless, but I am. I don't know, how much do you have in that little change purse of yours?'

"They're excited but Jameson doesn't know. He just thinks he's ... he thinks everyone works for him, at this point. He thinks his pre-school teacher works for him. They're very funny. Those kids are very funny."

Meanwhile, Pink recently recorded a duet with her daughter in the hope of bringing "sweetness, sunshine and comfort" to the world.

Speaking about the song, titled 'Cover Me in Sunshine', the singer said: "This past year has been so many things for us. Sad, lonely, scary, yes. It's also been quiet, reflective and a great teacher.

"Willow and I find comfort in music, so we're putting this song out for no other reason than that we hope it brings you sweetness, sunshine and comfort, too."