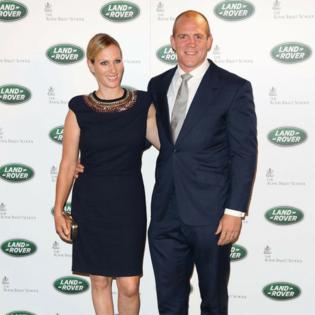 Mike Tindall says his new-born son Lucas is easy to look after.

The 42-year-old former rugby star and his wife Zara Tindall - who is the daughter of Princess Anne and Mark Phillips - welcomed their third child and first son together in March.

And after being left to look after Lucas by himself over the weekend, Mike - who also has daughters Mia, seven, and Lena, two, with Zara - has said he couldn't have asked for a better-behaved baby.

Describing last Saturday (01.05.21) as his "best day", ex-England rugby captain Mike told his 'The Good, the Bad, and the Rugby' podcast: "It was a great Saturday, because Zara's horses were running so she went off to watch them, took the girls with her and I had the wee man, and literally you feed him, he goes to sleep, I went to the gym, he wakes up, I feed him."

And Mike even managed to watch the rugby at the Gatcombe Park country estate where the Tindall family lives with Princess Anne, her husband Sir Timothy Laurence, and Anne's son Peter Phillips and his family.

He added: "I watched rugby whilst I was feeding him, he went back to sleep. It was the best day. Just the house on your own. There's not much going on. Just new born, a month-old, same old stuff. Feeding, bum wiping, but otherwise all good."

Following Lucas' birth on March 21, Mike spoke about how Zara delivered her baby on the bathroom floor as he arrived sooner than anyone was expecting.

He said at the time: "Sunday got even better because a little baby boy arrived at my house! Yeah brilliant, six o'clock last night.

"We haven't got a name yet, we're still working on it, we always struggle with that, we've never picked one before they arrived.