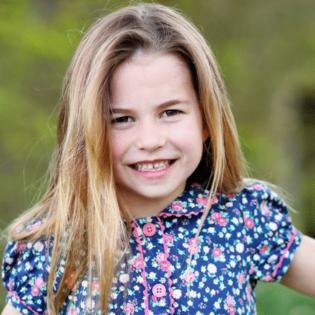 Princess Charlotte is set to follow in the footsteps of her mother, the Duchess of Cambridge, as a style icon.

The six-year-old royal looks set to become as much of a trendsetter as her mother Catherine after the floral dress she was pictured in for her recent birthday post on social media completely sold out.

According to Rachel Riley - who owns the upscale Rachel Riley boutique where Catherine bought her daughter's blue and pink dress - the item is now out of stock, and the designer has "no doubt" the young royal will one day become as much of a fashion influencer as her mum.

She said: "It was such a treat to see Princess Charlotte wearing our button front floral dress to mark her sixth birthday! She looks so happy in the picture. We look forward to seeing Princess Charlotte's style develop as she continues to grow and mature and we have no doubt she will become as much of a style icon as her mother is."

She added: "It's fun to see that this dress is a style which is as pretty on a four-year-old as it is for a six-year-old. The dress she wore when she was four featured a delicate, ditsy print in pastel pink, blue and yellow, whereas the style she wore in her most recent picture, she chose a larger print in stronger colours. This print has bigger pink flowers on a navy background, which is in keeping with the choice of older girls who tend to migrate towards bolder fashion choices."

Five years ago, 37-year-old Catherine was named as the person most women in the UK aspire to dress like.

The survey was carried out by Rakuten and found that almost 30 percent of British women want to emulate Catherine's style, putting her ahead of the likes of singer Ellie Goulding and actress Emma Watson.

Reese Witherspoon is surprised by the relationship she has with her children.

The Oscar-winning actress - who has Ava, 21, and Deacon, 17, with ex-husband Ryan Phillippe, as well as Tennessee, eight, with her current ...Read More

Khloe Kardashian has accused her sister Kourtney of hiding her love life on 'Keeping Up With the Kardashians'.

The 36-year-old star has claimed that she and her sister Kim have been much more open about their turbulent ...Read More

Luke Evans is set to star alongside Josh Gad in a 'Beauty and the Beast' prequel series.

The 42-year-old actor will star as Gaston in the upcoming series for Disney+, having previously played the part in the 2017 movie.

Roger Waters dismissed Mark Zuckerberg's big-money offer to use Pink Floyd's 'Another Brick in the Wall, Part 2' in an Instagram ad without any hesitation.

The 77-year-old musician has described the co-founder and current...Read More

Kristen Cavallari's sole focus is her kids when they're in her care.

The 34-year-old star has split custody of Camden, eight, Jaxon, seven, and Saylor, five, with estranged husband Jay Cutler - who she split from last ...Read More

The 71-year-old actress immersed herself in the role of Runway editor Miranda Priestly in 2006 movie 'The Devil Wears Prada' both on and off camera,...Read More