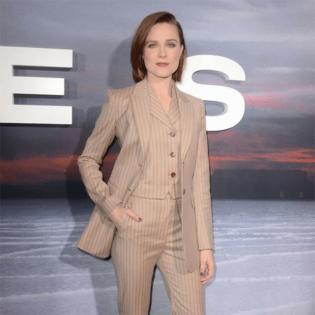 The 36-year-old model recently came forward to accuse 52-year-old rocker - who she met in 2010 - of psychological and physical abuse, claiming he sexually assaulted, bit, whipped and cut her during their past relationship, and the 'Dope Show' hitmaker's former fiancee has praised her for speaking out.

Alongside an image of Ashley's interview with People magazine, Evan - who has previously spoken of her own alleged ordeal with Manson - wrote on her Instagram story: "I stand with you @ashleylindsaymorga (sic)"

And another of the rocker's accusers, actress Esme Bianco, also sent support to Ashley.

She wrote on her own Instagram Story: "Thank you for being so brave."

Ashley has spoken with other women who have shared their own alleged experiences with Manson and admitted they made it easier for her to come forward.

She said recently: "It's been like this sisterhood. It's been really cathartic and good for all of us. It made things a lot easier."

Six of the women who have come forward with allegations of abuse met in September 2020 for more than six hours as they spoke up about their abuse, and Ashley said the meeting showed her the singer's behaviour was part of a "specific pattern".

She added: "It was like looking at a room full of myself. All of the abuse, the gaslighting, he just has a very specific pattern."

Ashley spoke about the alleged abuse she experienced earlier this week, when she said Manson cut her with a knife, drank her blood, and penetrated her while she slept.

Manson has denied all the allegations against him, and in response to Ashley's specific claims, he insisted their relationship "didn't last a week".

A spokesperson for the singer said in a statement: "There are so many falsehoods within her claims that we wouldn't know where to begin to answer them.