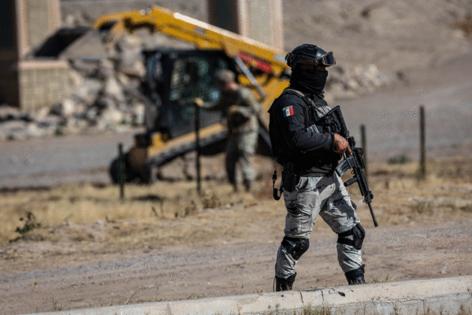 WASHINGTON — The Department of Homeland Security recorded a precipitous drop in encounters with migrants attempting to cross the U.S.-Mexico border illegally this month, the department said on Wednesday, putting January on track to see the lowest level of monthly border encounters since the beginning of the Biden administration.

In a statement, DHS officials credited its policy announced earlier this month that introduced a new parole program for Haitians, Cubans and Nicaraguans, offering potential migrants a new legal pathway to the United States while cracking down on illegal entries.

The program had been available to Venezuelans for several months, and led to a steep drop in Venezuelan arrivals at the U.S.-Mexico border.

Preliminary DHS numbers from January show that encounters of Cubans, Haitians, Nicaraguans and Venezuelans crossing unlawfully at the southwest border “declined 97% compared to December,” the agency said. “Encounters with individuals from these countries dropped from a 7-day average of 3,367 per day on December 11, to a seven-day average of just 115 on January 24.”

The agency said that the decline in encounters from those populations “occurred even as encounters of other noncitizens are returning to customary levels after a typical seasonal decline over the holidays.”

Mayorkas had already hinted at the reduction in numbers at the U.S. Conference of Mayors last week, telling the audience that encounters from “the targeted countries” had “dropped significantly” since the program had been announced. In a tweet, he had also warned Cuban and Haitian migrants who took to sea would not be eligible for the parole process.

Texas, Florida, and 18 other states are suing DHS and the immigration agencies it oversees, saying the federal government is abusing its power and that the initiative went beyond the limits of when the agency could use the parole process.