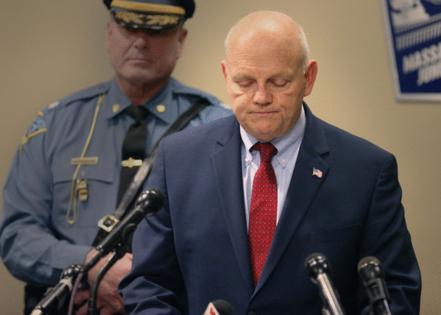 BOSTON — The 32-year-old mother of three at the center of the tragedy that shocked the Duxbury community late Tuesday night will be charged with the murder of two of her children.

Lindsay Clancy, the mother, is currently being hospitalized and will be arraigned on charges of homicide after she is released, Plymouth DA Timothy Cruz said Wednesday afternoon from the Police Department headquarters in Duxbury, a seaside town 35 miles outside Boston.

“As a result of information gathered during the course of the investigation, we developed probable cause and today are seeking and obtaining an arrest warrant out of Plymouth District Court charging 32-year-old Lindsay Clancy, the mother of these children, with their homicides,” Cruz said.

He added that the investigation into the tragic event Tuesday night remains “active and ongoing” and because of that, information released at this time is somewhat limited.

The facts of the case given Wednesday are mostly the same as those provided late Tuesday night. Cruz did provide names, however, and that the preliminary investigation indicates that the children appear to have been “strangled,” though the medical examiner will make the final determination.

Clancy’s husband arrived home and called 911 at around 6:11 p.m. to report that Lindsay Clancy had attempted suicide. When local police and firefighters arrived at the scene, they found the woman unconscious after apparently jumping from a window in the home.

A 7-month-old infant boy was also unconscious and flown to a Boston hospital, where he made it through the night, the DA’s office confirmed Wednesday morning.

“Our community is reeling from the tragic events of last night,” said the clearly emotional Duxbury town manager Rene Read. “We have a lengthy road ahead of us and we’re grateful we’re not alone in this.”

Read spoke alongside Cruz, who has been a DA for 22 years, and Duxbury Police Chief Michael Carbone, who has worked in law enforcement even longer, and said that “to be up here is tough, so I apologize.”