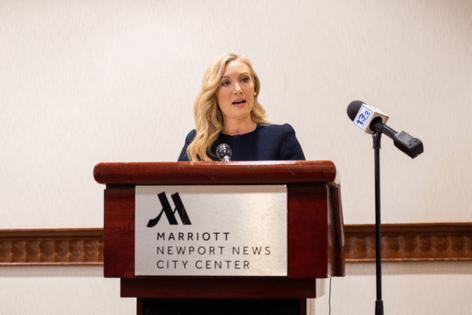 NEWPORT NEWS, Va. — Richneck Elementary School teacher Abigail Zwerner intends to file a lawsuit against the Newport News school division after school administrators “failed to act” before she was shot by her 6-year-old student, according to Zwerner’s attorney.

Diane Toscano, speaking at a news conference in Newport News on Wednesday, claimed school administrators had been notified of concerns regarding the student multiple times on the morning of the shooting. Zwerner was hit in the hand and chest. She is now recovering at home after a being treated at Riverside Regional Medical Center.

“Abby and the other teachers tried to do the right thing on Jan. 6,” Toscano said.

The Newport News school system was notified Wednesday morning of Zwerner’s intent to file a lawsuit.

She added that on Jan. 6, “concerned teachers and staff” warned school administrators that the boy had a gun at school and was threatening other students. However, Toscano said, “the administration could not be bothered.”

She presented a timeline of what happened that day prior to the shooting, though she did not say how this information was obtained.

According to Toscano, at 11:30 a.m., Zwerner told administrators a student was threatening “to beat up” another student. Approximately an hour later, another teacher reportedly searched the book bag of the student suspected of bringing a gun to school. The teacher then told administrators she believed the boy had taken the gun out to recess in his pocket.

Toscano claimed administrators had told the teacher, “Well, he has little pockets.”

Toscano said a boy later that afternoon went to a teacher crying, saying another student had shown him a gun and threatened him if he told anyone.

Another teacher reportedly asked school officials if he could search the boy but was told no, “because the school day was almost over,” Toscano said. Another hour later, the shooting occurred.