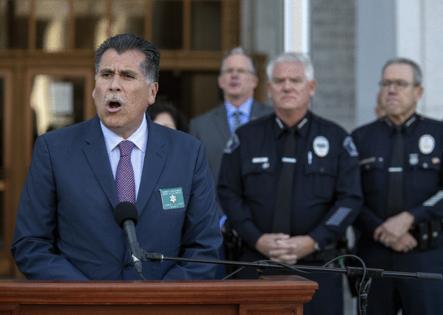 LOS ANGELES — As the investigation into the Monterey Park mass shooting continues, police officials are facing scrutiny over how long it took them to notify the public that the gunman was still on the loose.

Instead, the death toll and the gunman’s escape in the chaos was revealed through government sources in other agencies and radio broadcasts.

Authorities say Tran opened fire inside Star Ballroom Dance Studio in Monterey Park about 10:20 p.m. Saturday, killing 11 and wounding nine other people. The first 911 calls were made about 10:22 p.m., and police arrived at the studio within four minutes.

About 20 minutes after the rampage in Monterey Park, the shooter walked into Lai Lai Ballroom & Studio in nearby Alhambra. Brandon Tsay, 26, confronted him in the studio’s lobby and wrested the semi-automatic MAC-10 assault weapon away from Tran before watching him flee in a white van.

The shooting — one of the worst in Los Angeles County history — unfolded on the eve of Lunar New Year, just hours after the streets in Monterey Park had been filled with thousands of revelers celebrating one of the largest holiday events in the region.

L.A. County Sheriff Robert Luna said during a news conference Monday that in the hours after the shooting, authorities were trying to weigh assisting victims, investigating the scene and apprehending the suspect.

“When we started putting out public information, the priority was to get this person into custody, so we were very strategic in the way we were putting out information,” he said. “Ultimately, it worked.”

At 2:48 a.m., the Los Angeles County Sheriff’s Information Bureau issued an advisory confirming fatalities and noting the suspect was a man. But the alert didn’t mention he was not in custody.