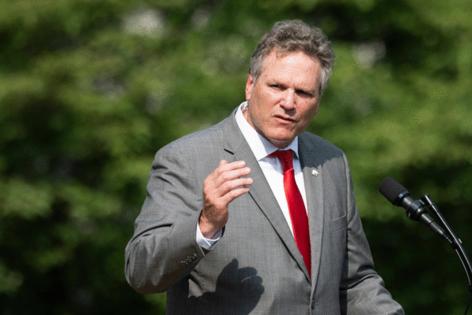 JUNEAU, Alaska — Gov. Mike Dunleavy said he wanted to make Alaska “the most pro-life state in the entire country” during his annual address to the Legislature, marking the Republican governor’s second term in office.

“We need more people in Alaska, not less,” Dunleavy said, but his on Monday evening speech lacked details on how he would make Alaska, where access to abortion is protected under the state constitution, more “pro-life.”

An anti-abortion rally held earlier in the day drew a sparse crowd, where Chris Kurka, a former Republican legislator and director of Alaska Right to Life, said “it’s a time to seize the day.”

Dunleavy has previously advocated for putting forward a constitutional amendment that would ask Alaskans to decide whether abortion-access remains protected. Such a bill has already been introduced by Sen. Shelly Hughes, a Palmer Republican who is in the minority. Dunleavy has not publicly backed Hughes’ bill.

Senate leadership members said they would be open to hearing abortion-related proposals but did not commit to advancing such a measure, which would require approval from Alaska voters.

Still, members of the bipartisan Senate caucus said they were impressed with Dunleavy’s State of the State address, which they said showed a willingness to work with lawmakers, even as they awaited more specific details about Dunleavy’s policy ideas.

“The devil’s in the details,” said Sen. Bill Wielechowski, an Anchorage Democrat, adding that he hoped for proposals to deal with K-12 education costs, child care availability, affordable housing and a backlog in federal SNAP benefits.

“I think there’s been a real sea change in the governor,” said Senate President Gary Stevens, a Kodiak Republican. “In my estimation, the governor is more comfortable with being governor.”

Dunleavy’s speech focused on what he called a need for the state to go “on the offense” against the federal government for the rights to develop its resources, including “low and no carbon energy.”

“In many respects we’ve been stereotyped as a land of fish and igloos, frigid temperatures, and fat bears,” Dunleavy said. “These perceptions, misconceptions and stereotypes can do real harm to Alaska and its future.”