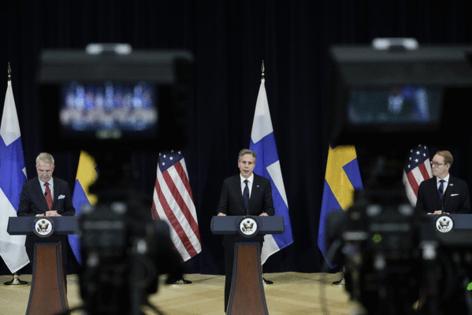 Finland for the first time opened the door to potentially decoupling its NATO application from that of Sweden, after its neighbor encountered fresh resistance from Turkish President Recep Tayyip Erdogan.

The path floated by Foreign Minister Pekka Haavisto, if it becomes more serious, would mark a significant shift in Finnish policy since the Nordic nations jointly applied to join the North Atlantic Treaty Organization in May. Faced with continued objections from Turkey — mostly to what it sees as inadequate crackdown on Kurds in Sweden — the two Nordic countries had up to now insisted their applications be considered together.

It’s still unclear how much Finland will shift its approach. The stance remains for the two countries to enter NATO simultaneously, given security considerations, Haavisto told reporters in Helsinki on Tuesday, softening comments from earlier in the day, when he’d said Finland may need to prepare going it alone.

“A joint path to NATO is still possible,” Haavisto said, adding that “somewhere in the back of our minds we are considering options in case a country were to face permanent resistance.”

Turkey and Hungary are the only two of NATO’s 30 members who have yet to ratify the applications, and on Monday, Erdogan ruled out supporting Sweden’s bid after a far-right activist burned Islam’s holy book in Stockholm. In response to his comments, U.S. officials reiterated their support for NATO’s expansion.

Erdogan’s comments injected new levels of doubt about Sweden’s prospects of joining the alliance, since the Turkish leader didn’t make clear whether he’s willing to change his stance. With an election slated for May, Erdogan is aiming to burnish his support from religious conservatives.

Still, Finland’s President Sauli Niinisto sought to ease tensions. Speaking to reporters in Kyiv, he urged taking it “calmly” and said “undoubtedly it seems to be the case that we have to wait for the elections in Turkey to take place.”

Turkey had suggested processing Finland’s application separately at the beginning of the process because it did not have major issues with Helsinki, but the idea was opposed by both Nordic countries as well as NATO Secretary General Jens Stoltenberg, two Turkish officials who spoke on condition of anonymity said Tuesday.

Turkey is largely happy with Helsinki’s cooperation with Ankara, which will be reflected in Turkey’s decision, they said, stopping short of saying whether the Turkish government would look favorably to quickly ratifying Finland’s bid if asked.

Joining NATO without Sweden would leave a large territory in Finland’s rear outside of the alliance, potentially risking supply routes and NATO’s ability to provide Article 5 security guarantees, Haavisto said. It would also entail rolling back some military cooperation the two counties have developed over the years.