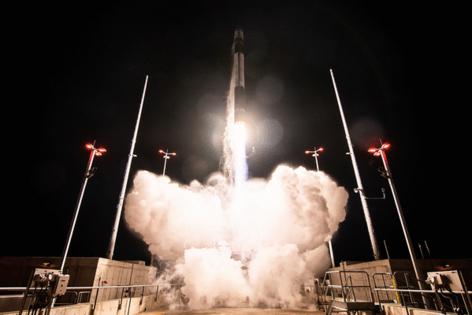 With 32 launches from New Zealand in the books, Rocket Lab made its first launch from the U.S. on a flight called “Virginia is For Launch Lovers” on Tuesday.

The Long Beach, California-based company sent its Electron rocket loaded with three satellites for radio frequency geospatial analytics provider HawkEye 360 into space with liftoff at 6 p.m. from the Mid-Atlantic Regional Spaceport at NASA Wallops Flight Facility on the Eastern Shore in Virginia.

“And liftoff of Electron from Launch Complex 2 leaving U.S. soil for the first time on its way to space up and over the Atlantic Ocean, all nine Rutherford engines on Electron’s first stage now propelling the rocket,” said Rocket Lab commentator Murielle Baker during live stream of the launch. “We’re hearing good call from the teams from Virginia and Rocket Lab Mission Control. A clean ascent for Electron.”

With a successful deployment of its payload an hour after liftoff, Electron has now managed to send 155 satellites to orbit for both commercial and government customers including NASA, the National Reconnaissance Office, DARPA and the U.S. Space Force.

It has several more Virginia-based launches planned including up 12 more satellites for HawkEye 360. It also has on tap a tropical weather mission for NASA, tasked to send up four satellites on two launches, the first of which is slated for no earlier than May.

“In under 11 months with our partners with Virginia Space, we built Launch Complex 2 — that includes all the critical infrastructure to launch Electron,” said Rocket Lab vice president of launch systems Shaun D’Mello noting the company also built an integration and control facility to process multiple rockets and payloads. “With Launch Complex 2 now operational, we have enhanced our global launch capability to over 130 launch opportunities per year. This provides small satellites unrivaled flexibility to get to orbit. This launch has been a long time coming.”

The company has two launch sites in New Zealand it will continue to use in addition to Virginia's.

Rocket Lab’s Electron rockets, though, are smaller, standing only 59 feet high and just shy of 4 feet wide with the ability to carry 661 pounds to low-Earth orbit.

In comparison, SpaceX’s Falcon 9 is 230 feet tall and 12 feet wide with the ability to carry 50,000 pounds to low-Earth orbit with as much as 1.7 million pounds of thrust at liftoff.

Rocket Lab is working on its own larger and reusable rocket called Neutron that will have a 28,660-pound capacity to low-Earth orbit.