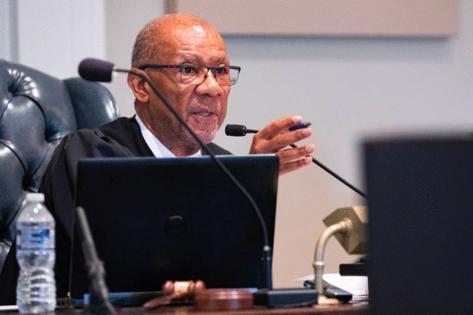 WALTERBORO, S.C. — Jurors in the murder trial of Alex Murdaugh will hear evidence that the gun that killed Murdaugh’s wife was tied to her husband.

Investigator seized several guns from the Murdaugh family home after Maggie and Paul Murdaugh were killed in June 2021. But, until now, the state has not identified a murder weapon in the mother and son’s deaths. A defense filing Monday revealed for the first time that testing by the State Law Enforcement Division had connected a weapon previously fired at Moselle to cartridges retrieved from the murder scene.

Lead prosecutor Creighton Waters told Judge Clifton Newman on Tuesday that casings were found that matched a “blackout AR-style rifle purchased by Murdaugh that can no longer be accounted for.”

Newman ruled to admit the evidence and a SLED witness who tested the casings, despite the defense team’s challenge to the reliability of the state’s evidence.

After testing at a SLED facility, an agent concluded “some of the .300 cartridges retrieved from the firing range and near the residence were fired and/or loaded into, extracted, and ejected by the .300 Blackout rifle taken from the property,” according to a motion filed as jury selection got underway Monday at the courthouse in Walterboro.

The same analysis did not, however, conclusively identify that the shells found near Maggie’s body were fired from a gun recovered by investigators.

The defense team of Dick Harpootlian and Jim Griffin has asked Newman to exclude that evidence from the trial because it’s based on an “inherently subjective” analysis.

A .300 cartridge is most commonly fired from an AR-15 assault rifle.

SLED expert Paul Greer testified in court Tuesday that he had reviewed the casings from the crime scene compared to other casings recovered from the Moselle firing range and elsewhere, and determined the similar markings suggest they were fired from the same gun.

swipe to next page
©2023 The State. Visit at thestate.com. Distributed by Tribune Content Agency, LLC.
blog comments powered by Disqus