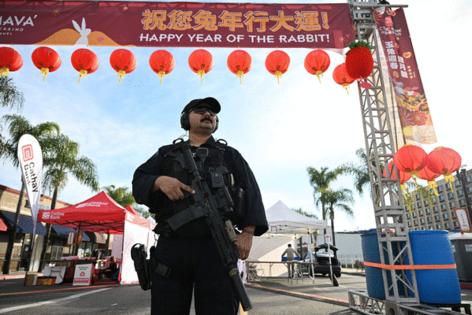 MONTEREY PARK, Calif. — Star Ballroom Dance Studio is where international ballroom competitors teach their moves. Where retirees learn how to waltz, tango and samba. Where elderly and middle-aged couples while away Saturday nights.

Where they feel safe. And happy.

“They’re mainly just there to enjoy life and hang out and have fun,” said 40-year-old Elizabeth Yang, who has taken ballroom classes at the studio for a year.

All that changed late Saturday night on the eve of the Lunar New Year, a time to welcome prosperity, health and good luck.

The studio had scheduled a Lunar New Year’s Eve party for 8 p.m. Saturday. It was supposed to end at 12:30 a.m. Sunday. A message in the dance studio’s WeChat group advertised a “Chinese New Year Countdown Dance Party,” with games and a photo booth.

But around 10:20 p.m., 72-year-old Huu Can Tran, armed with a semiautomatic pistol, stormed into the studio. The shooting began. The celebration stopped.

And moments later, 10 people were dead. At least 10 others were injured.

The community was left reeling as the motive for the violence remained unclear.

“These dance clubs are such establishments of joy for people,” said U.S. Rep. Judy Chu (D-Monterey Park), who has lived in the city for 37 years and previously served as mayor three times. “These are folks who are getting their exercise, they’re developing their skills. ... They just enjoy coming.”

Dariusz Michalski, who has taught private and group lessons at the dance studio for 12 years, said he believes the studio’s community of teachers and students will find the strength to carry on, despite the tragedy.