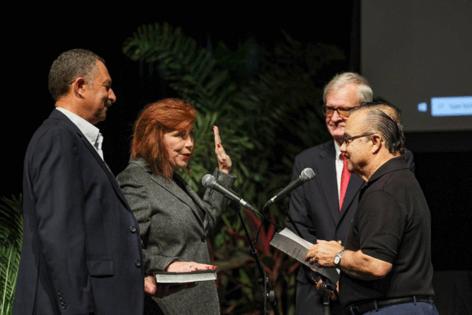 MIAMI — A new Broward School Board member is being denounced by civil-rights groups, LGBTQ leaders and two of her fellow board members after saying she welcomes support from all kinds of groups, even the far-right Proud Boys.

Brenda Fam, who was elected in November to a seat in the Weston and Davie area, posted the comment on Facebook on Thursday morning. She was responding to criticism over her speaking about sex trafficking at a Dec. 3 rally on A1A in Fort Lauderdale that featured anti-LGBTQ rhetoric by some participants and an appearance by uniformed members of the Proud Boys, which several civil rights groups have identified as an extremist hate group.

“If going to a rally entitled ‘Protect the Children’; carrying a sign that states ‘Grooming Leads to Sex Trafficking’ is offensive, then so be it,” Fam wrote on Facebook.

“If you support my cause, to protect the children you are welcomed to stand next to me,” she wrote. “Doesn’t matter if you are gay, straight, black, white, Black Lives Matter, or the Proud Boys. The children don’t care who is rescuing them; they just want to be rescued.”

The Anti-Defamation League identifies the Proud Boys as “a right-wing extremist group with a violent agenda. They are primarily misogynistic, Islamophobic, transphobic and anti-immigration.” The Southern Poverty Law Center also identifies the Proud Boys as a hate group. Five members were charged with sedition at the Capitol riots on Jan. 6, 2021, according to reports.

“ADL Florida was profoundly disturbed to learn that Broward County School Board Member Brenda Fam spoke at a rally in her public capacity organized by organizations engaging in anti-LGBTQ+ extremism,” according to a statement from the ADL.

He said Fam “failed to condemn the bigotry espoused by the organizers and attendees,” including the Proud Boys.

At least two of Fam’s fellow School Board members said they were shocked and alarmed by Fam’s participation in the rally and her Facebook comments.

“This statement chills me to my soul,” Board member Nora Rupert said in a text. “Our students, families, employees and volunteers deserve a safe place physically, mentally and socially.

“This world is a tough place for all students right now and we do not need this. Our community does NOT need this vitriol coming from the Broward County School Board. Let’s lead with kindness.”