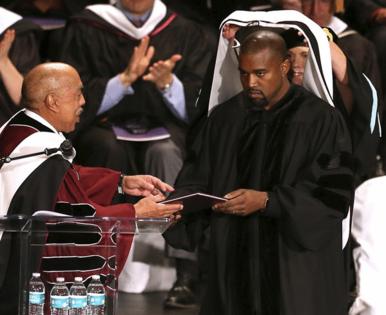 CHICAGO — The School of the Art Institute of Chicago on Thursday rescinded an honorary degree awarded to Kanye West.

The decision comes amid growing pressure on West, now known as Ye, after he made repeated public antisemitic statements. Ye recently praised Adolf Hitler on a far-right talk show and was kicked off Twitter for posting a photo of a swastika.

“The School of the Art Institute of Chicago condemns and repudiates Kanye West’s (now know as Ye) anti-Black, antisemitic, racist and dangerous statements, particularly those directed at Black and Jewish communities. Ye’s actions do not align with SAIC’s mission and values,” a statement confirming the recension shared by school spokesperson Bree Witt said.

Controversy swirled in 2015 when the Art Institute awarded the rapper and fashion mogul, raised in Chicago, a doctorate, the Chicago Tribune reported at the time.

“This honor is going to make your lives easier,” Ye said seven years ago. “You don’t have to defend me as much!”

Ye joined Alex Jones, host of “Infowars,” on Dec. 1. On the show, he praised Hitler and repeatedly made antisemitic statements.

“Every human being has something of value that they brought to the table, especially Hitler,” Ye said before calling out former Chicago Mayor Rahm Emanuel and his brother Ari Emanuel, who are Jewish.

When Jones, who was recently ordered to pay nearly $1 billion to the parents of children killed in the Sandy Hook mass shooting for spreading false conspiracy theories suggesting the shooting was faked and the parents were actors, pushed back on Ye’s comments in support of Hitler and Nazis, Ye reiterated: “I like Hitler.”

Ye had already lost major deals and partnerships because of his statements in recent months before he escalated his antisemitic rhetoric last week.

Adidas ended its partnership with Ye in October after he tweeted he would soon go “death con 3 on JEWISH PEOPLE,” an apparent reference to the U.S. defense readiness condition scale known as DEFCON. The company’s partnership with the rapper was said to be worth billions. Ye’s ties to companies, including Balenciaga and the Gap, were also cut.

That same month, a Fulton Market mural honoring Ye was painted over by its artist.

A petition calling for his honorary degree to be rescinded emerged last week after the Infowars appearance and quickly spread. It garnered over 4,000 signatures.

“Regardless of his contributions prior to receipt of this award, it is harmful to allow Ye, as he is presently known, to continue to use the School of the Art Institute of Chicago to help legitimize hatred and violence,” the petition said. “This harm impacts all oppressed peoples, who stand to suffer when intimidation and deadly violence against people on the basis of their identity are made justifiable.”

In a letter announcing the decision Art Institute President Elissa Tenny said she conferred with the school’s Board of Governors. The artist has “exhibited disturbing behaviors and made dangerous statements” since the school awarded him the degree, she wrote.

“Though we firmly believe in the right to express a diversity of opinions and beliefs, the severity of his behavior made it clear that rescinding this honor was appropriate,” Tenny said.