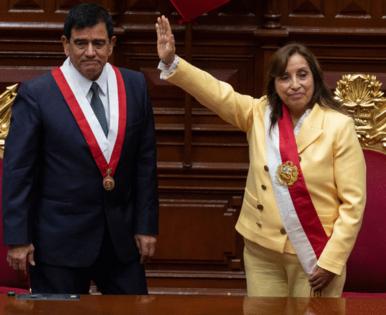 Peru’s sixth president in four years starts her first day in office seeking to build a cabinet and restore confidence in the $240 billion economy after her predecessor tried to suspend congress and call for a new constitution.

Dina Boluarte vowed to build a unity government and met with the country’s archbishop hours after being sworn in as president of the Andean nation. That followed a tumultuous day in which President Pedro Castillo’s proposals were repudiated by the military, members of his party and the country’s constitutional tribunal, which called his bid a coup. Castillo was impeached and detained Wednesday.

Boluarte, Peru’s first female head of state and Castillo’s former vice president, now has the daunting task of bringing some stability to a nation that has seen every elected president since 1985 impeached, imprisoned or sought in criminal investigations.

In her inaugural address, the 60-year-old Boluarte sought to send a message of calm after a day of intense political drama, saying she would seek a government of national unity. She also pledged to fight the “shameful” corruption that afflicts the country and denounced Castillo’s earlier attempt to dissolve congress.

“There has been an attempted coup d’etat,” Boluarte said in her speech. “I call, therefore, for a broad dialog process among all the political forces.”

The new president is expected to try to finish out the remainder of Castillo’s five-year term — he took office in July 2021 after a protracted post-election period marred by vote recounts and lawsuits prompted by allegations of fraud. The U.S. and the European Union said at the time that the election was clean.

Boluarte vowed to name a cabinet that represents “all democratic forces” and asked for a “truce” in the political infighting to be able to govern and have a “viable country.”

The speech “gives great calm to the citizens and congress too,” Alexandra Ames, a Peru-based political scientist, said. “We will have greater clarity whether her intentions go toward a real government of consensus and national unity when we see how her cabinet is composed.”

Yet reestablishing stability will be a massive challenge for Boluarte, who has little political support after being expelled by the party with which Castillo won the 2021 election. A lawyer by training, Boluarte has limited political experience, having failed in a 2018 bid to be mayor of the Surquillo district of Lima and in a 2020 campaign to be a lawmaker for the capital.

“Boluarte had no previous political experience prior to being elected VP, so she has no support base of her own,” Ramiro Blazquez, head of global research at BancTrust & Co, an investment bank focused on emerging markets, said in a note to investors. “Given the high level of fragmentation of Peruvian politics, we see a high probability of a repeat of the musical chairs.”