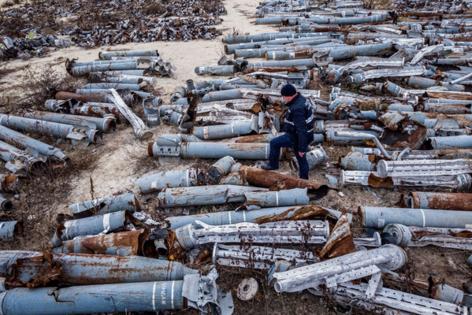 While this week’s drone attacks on Russian airfields that the Kremlin blamed on Ukraine were of largely symbolic value, Kyiv’s apparent readiness to take the war to Vladimir Putin may be constrained by nervousness among its allies over his potential reaction.

The strikes at three airfields, including ones used on bombing missions against Ukraine’s civilian infrastructure, boosted morale among Ukrainians enduring electricity and water outages in winter under repeated missile barrages. Kremlin threats of escalation in response have proven empty, at least so far.

Yet U.S. and European sympathy for Ukraine in wanting to hit back at attempts to freeze its population into submission is matched by anxiety over Putin’s red lines for resorting to his nuclear arsenal if attacks on Russian soil continue. That makes them reluctant to offer encouragement to Kyiv, still less weaponry with a range permitting far-reaching strikes into Russia, even as Putin’s invasion increasingly falters on the battlefield.

“We have been very clear about our concerns over potential escalation,” U.S. National Security Council spokesman John Kirby told reporters Wednesday, in answer to a question on whether Washington was discouraging Ukraine from strikes inside Russia. “It’s their decision to make. We have not encouraged them to do that.”

Putin warned on Wednesday that the threat of nuclear war is rising in the world. He stopped short of pledging that Russia won’t be first to use atomic weapons, while calling them a “deterrent factor” in conflicts.

“We won’t brandish them like a razor, running around the world, but we of course proceed from the fact they are there,” he told a meeting of his Kremlin human rights council.

In keeping with past practice when sensitive Russian targets were hit, Ukraine hasn’t publicly claimed responsibility for attacks that damaged two strategic bombers on Monday at military bases in the Saratov and Ryazan regions at least 500 kilometers (310 miles) from the border between the two countries. A drone hit a third airfield Tuesday in Kursk, about 100 kilometers from Ukraine.

“It’s clear that the incidents that lead to a weakening of Russia’s offensive potential fit the interests of Ukraine,” said Mykola Bielieskov, a research fellow at the National Institute for Strategic Studies, a government think tank in Kyiv. Damage to Russia’s long-range strike capability “reduces the potential of Moscow to conduct a campaign to destroy Ukrainian energy infrastructure,” he said.

The Biden administration has provided Ukraine with increasingly sophisticated weapons, including HIMARS multiple-launch rocket systems that have proved devastating against Russian supply routes and ammunition dumps far behind the front lines in occupied territory. But officials have balked at sending the Army Tactical Missile System, known as ATACMS, requested by Ukraine because its range would allow targets inside Russia to be hit.

Ukraine is “trying to puncture Russian morale which is already low and boost the morale of its own population,” said Natasha Kuhrt, a senior lecturer in international peace and security in the Department of War Studies at King’s College, London. “It will definitely be increasingly difficult for the West to refuse to send longer range missiles to Ukraine.”