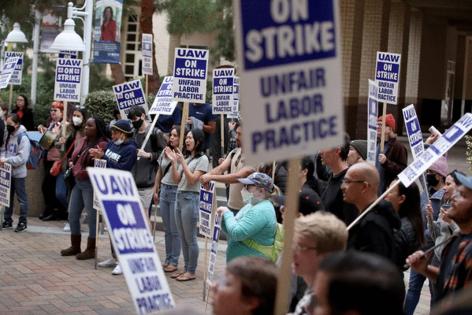 LOS ANGELES — When 48,000 University of California academic workers went on strike in mid-November, Stacy Fahrenthold joined them on the picket line. The associate professor of history at UC Davis canceled lectures and will not read final papers or record grades until the walkout is settled.

“We don’t have the grading labor to do it,” said Fahrenthold, who would normally rely on a graduate student worker to score assignments.

Such disruption has unfolded throughout the UC system‘s 10 campuses. As the massive strike by teaching assistants, tutors, graduate student researchers and postdoctoral scholars drags into its fourth week, the walkout has reached a pivotal moment, exacting its harshest toll yet on students, faculty and picketers during the all-important finals week in California’s premier higher education system.

The striking workers’ absence from classrooms and offices this week has limited the scope of final assessments, providing the greatest show yet of the crucial contributions they make to UC’s reputation for excellence. These are the workers who conduct study sessions, offer crunch-time tutoring, read term papers, and proctor and grade exams.

A tally from the Council of UC Faculty Associations estimates faculty will withhold at least 34,000 grades across the system. Faculty have pared down final assessments, shortened length requirements for essays or are omitting material from exams that was not covered because of the strike.

Michael Chwe, a professor of political science at UCLA, said he could not on his own grade assessments for the 240 students in his class on game theory — even if he wanted to.

Each student in his class is expected to submit a 15-minute video explaining how they would solve various problems for their final assessment. Chwe would normally rely on his four TAs, who work more closely with students than he does, to help with grading, and seek input from them on students’ performance to inform final grades.

“I couldn’t physically do it,” Chwe said. “If TAs [aren’t] grading because they’re on strike, I cannot go forward with the final grade assessment.”

At UCLA on Tuesday, Meia Schram, a second-year student studying applied math, said two of her finals were changed to include material only from the weeks before the strike. It was a good compromise, she felt, but still a more stressful time than usual. It was less clear what assignments were due and how finals would work because TAs were not around.

“For the first week or two I was like, what am I supposed to be doing?” Schram said. “It was really confusing, especially when you’re not getting emails from people you usually get consistent emails from.”