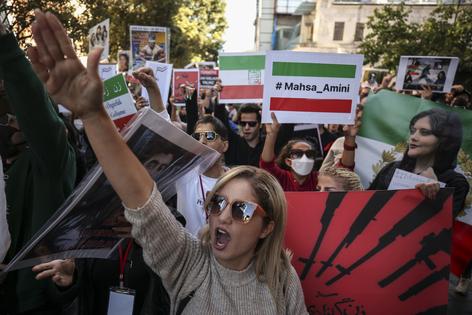 Until recently, most people outside of Iran had never heard of the country’s morality police, let alone followed their wider role in the region. But on Sept. 16, 2022, the death of Jina Mahsa Amini sparked widespread protests in the streets of Iran and elsewhere that have shown no signs of abating. Amini had been in the custody of Gasht-e-Ershad, the Persian name of this notorious police force, for “improper wearing of hijab.”

Yet, there were those who doubted the comments and called it a “false flag” on the part of those in power. A few noted that even if the morality police were abolished and the mandatory wearing of the hijab repealed, the regime would still need to be held accountable for all of its human rights violations.

These sentiments have formed the basis of a three-day nationwide strike that began on Dec. 5 and has shuttered thousands of shops, including those in the historic Grand Bazaar in the heart of Tehran, bringing the economy of the country to a grinding halt.

But who are the morality police? Where did they come from? And what is their history during and before the Islamic Republic of Iran?

The mandate and power of morality police date back to before the Islamic Revolution that shook Iran in 1979, and their reach has extended throughout the Middle East.

The Quran says that it is imperative that religious leaders “ensure right and forbid wrong.” To carry this out, beginning at the time of the Prophet Mohammad, public morals were overseen by market inspectors referred to as muhtasib.

As a scholar of gender and feminism in the Middle East, I’ve studied the long history of debates about the role of Islam in regulating morality. The earliest evidence of a muhtasib, interestingly, was a woman selected in Medina by the prophet himself.

Over the centuries, the mandate of the muhtasib became focused on regulating dress, particularly for women. While these market inspectors were recorded as issuing fines and occasional lashings, they did not have the same level of authority as the judiciary.

By the early 20th century, however, the muhtasibs had transitioned into the vice squads, patrolling the streets to make sure people were complying with Islamic values. It was mostly in Saudi Arabia under the influence of Wahhabism that morality police forces first gained prominence and momentum. The first modern morality police force, an official committee charged with “commanding right and forbidding wrong,” was formed in the Kingdom of Saudi Arabia in 1926. Comprised mostly of men, the force was charged with enforcing modest dress, regulating heterosocializing – engagement with members of the opposite sex if unmarried or unrelated – and ensuring citizens attended prayer.