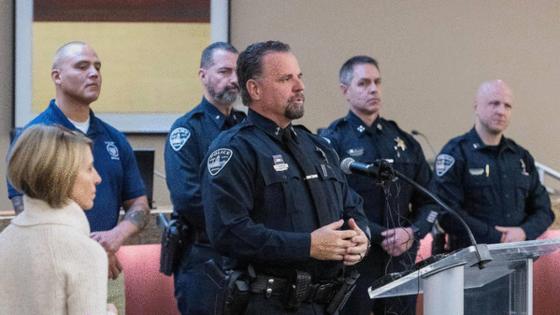 BOISE, Idaho — A retired Boise police captain who has espoused white supremacist views and prompted an in-depth investigation of potential racism at the Boise Police Department filed a complaint against the city with the Idaho Human Rights Commission in November.

Matthew Bryngelson, a nearly 24-year veteran of the department who oversaw the patrol division and retired in August, alleges age and disability discrimination in a complaint filed with Idaho’s Human Rights Commission and the U.S. Equal Employment Opportunity Commission.

The complaint was filed Nov. 8, less than two weeks before Bryngelson’s racist views became public. An attorney who filed the complaint, J. Grady Hepworth, told the Idaho Statesman by phone that his firm no longer represents Bryngelson, but declined to comment further. Bryngelson could not be reached for comment.

Hepworth Law Offices has represented a number of former Boise police employees with grievances against the department and the city, including Jesus Jara, the Office of Police Accountability director who was put on administrative leave on Dec. 2, and retired captain Tom Fleming, who filed a whistleblower lawsuit against the city in November as well as alleging age and disability discrimination.

The Bryngelson complaint alleges that he had been “diagnosed with severe depression and anxiety,” and that in September 2021 he became “despondent and suicidal as a result of the harassment and workplace hostility from Chief Ryan Lee.”

Lee resigned at Mayor Lauren McLean’s request in September, after complaints from a number of officers became public. Bryngelson was one of those officers who complained publicly, in a televised interview with KTVB. Emails obtained by the Statesman that were sent from a Boise police employee to the city’s Human Resources department note that Bryngelson had a breakdown in September, was “manic” and “suicidal.”

Two months later, observers tied posts and an interview on a white supremacist website back to him. Bryngelson’s pseudonym appeared to have been taken from a neo-Nazi character from a 1990s film, according to previous Statesman reporting. In the posts, he indicated that he moved to Boise from California because of Boise’s large white population, and accused Black people of having a predilection toward violent crime.

On Tuesday, the Boise City Council approved a contract with prominent attorney Michael Bromwich to lead an investigation into Bryngelson’s tenure at the Police Department and to examine whether racism penetrates any other parts of the department.