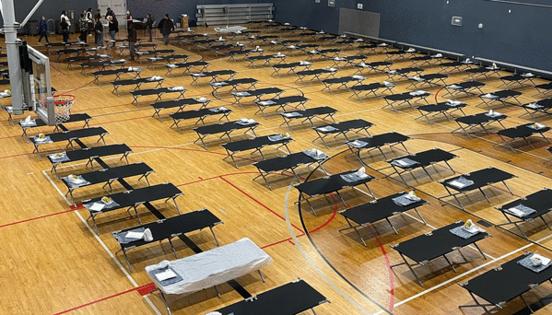 DENVER — Denver has set up an emergency shelter to accommodate as many as 100 immigrants from the U.S.’s southern border after the group arrived in the city by bus overnight Monday into Tuesday, according to the Denver Office of Emergency Management.

Staff with the Denver Rescue Mission say that the roughly 100 people the city is housing is only a portion of the influx of immigrants, mostly from Venezuela, who arrived at the doors of the organization’s downtown shelter over a 48-hour period dating back to Monday night.

“Last night we housed approximately 50 people at our Lawrence Street downtown shelter,” Denver Rescue Mission spokesman Stephen Hinkel said of the facility located at the corner of Lawrence Street and Park Avenue West. “And then we transported 100 to the rec center.”

Despite earlier reports from city officials that the immigrants were bused directly to the shelter, Hinkel said that it appears the people likely arrived at Union Station and then walked to the Rescue Mission several blocks away. Union Station is where the city’s main public bus terminal is located. Greyhound Lines also runs its bus routes out of the station.

“That is definitely where the buses were dropped off,” Hinkel said. “What we are assuming, based on our conversations with the immigrants, is they got off the buses and were looking for services and were directed to the Denver Rescue Mission’s front doors.”

The Denver Office of Emergency Management announced the activation of a city rec center as an emergency shelter on Twitter just after 6:30 p.m. Tuesday. The city is not releasing the location of the emergency shelter due to security concerns and the sensitivity of the developing situation, according to a news release.

A steady stream of immigrants has been coming into Denver for the last two to three months but at a rate that the city’s shelter system could accommodate, Mikayla Ortega, a spokeswoman for the emergency management office said Wednesday. So many people arriving at once pushed the Rescue Mission beyond its limits requiring the city’s immediate help.

“They reached out to us and sent up the flag. They said we need your help. That was yesterday morning,” Ortega said Wednesday. “That was when we activated the emergency shelter to accommodate the overload.”

The emergency management office shared a photo on Twitter of rows of cots set up in a gymnasium and stacks of bottled water for the people needing shelter. The immigrants arrived at that makeshift shelter around 8 p.m. Tuesday, Ortega said.

Through conversations with the immigrants, the city and Denver Rescue Mission staff has learned that most are from Venezuela. A majority are between the ages of 20 and 40 but there are at least one or two children in the group, according to Ortega.