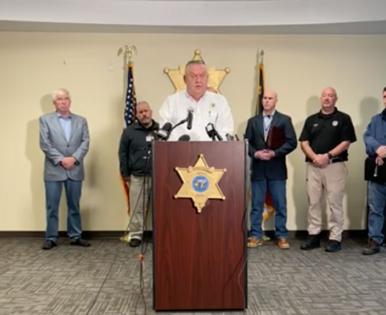 RALEIGH, N.C. — Power has been restored for thousands of the Moore County, North Carolina, households and businesses that lost it, including the hospital in Pinehurst and some homes in Carthage.

Power returned to the 402-bed FirstHealth Moore Regional Hospital around 9 a.m. Wednesday, said Gretchen Kelly, a spokesperson for the hospital. Since the widespread power outage started after an attack on two electrical substations, the hospital has been operating on a backup generator. The hospital is now in the hours-long process of transitioning from generator power to full power.

While the attacks initially struck 45,000 customers and their families, Duke Energy had whittled that number down to 23,000 by Wednesday morning.

The smaller Randolph Electric Membership Cooperative also lost power to roughly 2,600 homes, and has been doing “rolling power-ups” throughout the week — giving families a few hours of electricity at a time.

Duke Energy said it had completed work on the damaged substations and hoped to have most power restored Wednesday before midnight.

“All substation equipment damaged from recent vandalism has either been fully repaired or replaced,” the company said on its outage website Wednesday. “Once we have completed all necessary testing, the gradual restoration of service to those Moore County communities still without power will begin. To avoid overwhelming the electrical system we will bring power back on gradually, with the goal of having the majority of customers restored before midnight tonight.”

In Carthage, ‘People are really looking out for each other’

A neon sign outside of the Moore County Sports Complex in Carthage read “Shelter and Showers” on Wednesday’s rainy morning. After three days, with power restored in much of the county seat of Carthage, the complex had been operating as a shelter for community members to sleep, use WiFi, eat or take a hot shower.

Sarah Hilliard beamed as she walked to her car, leaving the shelter. Her husband had just texted her that the power at their house had come back on.

“It’s like the text you’ve been waiting for,” she said. “It’s finally come through.”