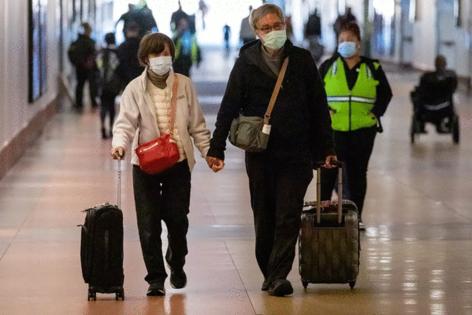 LOS ANGELES — A few weeks ago, there was cautious optimism that this winter would not see a significant COVID-19 surge.

But in Los Angeles County, that outlook is in jeopardy. Case counts are climbing rapidly, sending increasing numbers of Angelenos to the hospital and raising the possibility of a renewed public indoor mask mandate that could arrive shortly after the new year.

But why is the nation’s most populous county contending with such a significant spike?

Some factors that may be at work include a shorter incubation period for the latest Omicron strain, meaning there would be a shorter period between when someone is exposed to the virus and when they become infected.

“People came back from Thanksgiving and pretty quickly were testing positive,” county Public Health Director Barbara Ferrer said. At her agency, “we had more people who tested positive right after Thanksgiving than we’ve ever had before,” with transmission occurring during holiday gatherings, rather than at work.

“A shorter incubation period could be contributing to a more rapid increase in cases earlier on in December than we saw the past two years,” she said.

BQ.1 and BQ.1.1 are now the dominant versions of the coronavirus circulating nationwide. Their parent strain, BA.5, was said to have an incubation period of three to five days.

For the week ending Tuesday, L.A. County reported an average of 3,829 new coronavirus cases a day — double the rate from Thanksgiving. On a per capita basis, that’s a rate of 265 cases a week for every 100,000 residents. A rate of 100 or more is considered high.

“We’re having this increase starting a little bit earlier,” Ferrer said in an interview with The Times.