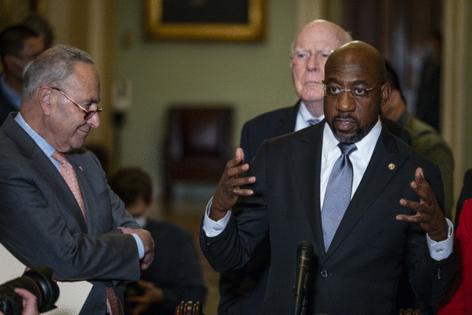 WASHINGTON — With Sen. Raphael Warnock having prevailed in Georgia’s Senate runoff election, for the first time in the history of the direct election of senators, no incumbents who sought reelection lost in either a primary or general election. And the days of the deadlocked Senate are numbered.

Come January, the Democratic caucus will have 51 members, bringing an end to the power-sharing agreement with Republicans that governed Senate operations for the duration of the 117th Congress. With Republicans taking control of the House, there might not be much legislating, but it will be easier for Senate Majority Leader Charles E. Schumer, D-N.Y., to advance other parts of the agenda.

“It’s amazing how Republicans have been able to use the 50-50 Senate to procedurally hold up so many appointments. It’s going to be a lot quicker, swifter and easier,” Schumer said Wednesday. “It also means that our committee chairs have more flexibility on legislation. The number of times committee chairs came to me and said ‘I’d like to move this bill forward, but in a 10-10 committee, I can’t do it.'”

The last 50-50 Senate, in 2001, ended more abruptly when Sen. Jim Jeffords of Vermont left the Republican party and joined the Democratic caucus, a move that shifted the Senate from a 50-50 tie and a Republican majority with Vice President Dick Cheney as the tiebreaker to a Democratic majority with 51 in the caucus.

When the Senate reconvenes, gone will be the irregular practices that come with the power sharing arrangement and its related precedents.

No blockade from a single Democrat

If a moderate like Sen. Joe Manchin III, D-W.Va., or a progressive like Sen. Bernie Sanders, I-Vt., is the lone opponent in his caucus to something, particularly a nomination, that Schumer wants to advance with a simple majority, that will no longer be enough to grind the gears to a halt.

“When you have 50 senators, any one senator can say, ‘I’m not voting for it unless I get this, this, or this.’ With 51, we can go bolder and quicker — to show Americans what Democrats stand for,” Schumer said in a message to Progressive Change Campaign Committee supporters ahead of the runoff.

One absence won’t grind proceedings to a halt

On a related note, a single absence by a Democratic senator (whether because of a positive test for COVID-19 or some other reason) will not stop consideration of party-line simple majority votes like nominations, since a 50-49 vote would still be a simple majority and enough to secure confirmation.

The power-sharing rules have allowed Schumer to get nominations to the floor that deadlock in committee by moving to discharge the nomination, but that’s a somewhat time-consuming process that does not allow the Senate to confirm nominees in quick succession, contributing to the number of Biden nominees that have remained unconfirmed. With just a one-seat majority in the Senate as a whole, the Democrats are also assured of a one-seat majority on each committee, as Schumer pointed out at his post runoff news conference on Wednesday.

While most of the investigatory focus next year may be on the House side with Republicans claiming the gavels of key oversight committees, Senate Democrats also will gain access to new subpoena powers. Most Senate panels require either a majority vote or the concurrence of the ranking member to issue subpoenas, something that has been functionally impossible on party-line matters this Congress.

“People say, ‘well, it’s the Biden administration,’ oh no, no, no, no, subpoena power can deal with corporate corruption corruption and inequities and other problems throughout the country,” Schumer said.

Vice President Kamala Harris will have some additional schedule flexibility in the new year from not having to be available to rush to the Capitol when the Senate has tough votes that may generate unified GOP opposition. As the president of the Senate, the Constitution makes Harris is the tie-breaker in a 50-50 Senate. Since 2021, she has steadily moved up the list of tie-breaking votes cast by a vice president, reaching third all-time list behind John Adams and John C. Calhoun.