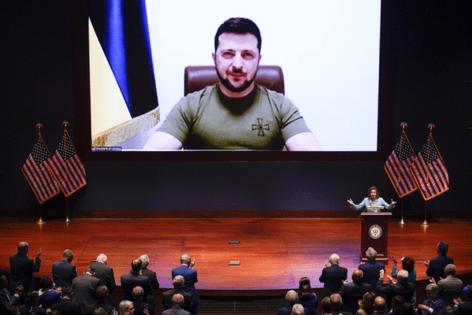 Volodymyr Zelenskyy, the Ukranian president leading his country’s fight against Russia, is Time’s 2022 Person of the Year, the magazine announced Wednesday.

Time pointed to Zelenskyy staying and fighting instead of fleeing after Russia invaded Ukraine in February, saying in its selection article that “courage is contagious.”

“Whether one looks at this story of Ukraine with a sense of hope or a sense of fear — and the story is, of course, not fully written yet — Zelenskyy really galvanized the world in a way we haven’t seen in decades,” Edward Felsenthal, the magazine’s editor-in-chief, told NBC’s “Today” show.

Zelenskyy, a former comedian, became president of Ukraine in 2019. His leadership since Russia’s invasion includes visiting soldiers amid the conflict and garnering global attention and support for his country’s efforts, including during a rousing address at April’s Grammy Awards.

“Later we will be judged,” Zelenskyy told Time. “I have not finished this great, important action for our country. Not yet.”

Established in 1927, Time’s Person of the Year title recognizes the person, group or idea with the largest global influence, positive or negative, over the past 12 months.

Earlier this week, Time selected “Everything Everywhere All at Once” star Michelle Yeoh as its Icon of the Year, chart-topping Korean-pop group Blackpink as its Entertainer of the Year and Aaron Judge as its Athlete of the Year.

Judge, who slugged an American League-record 62 home runs during the 2022 season, agreed Wednesday to re-sign with the Yankees for $360 million over nine years, the Daily News confirmed.