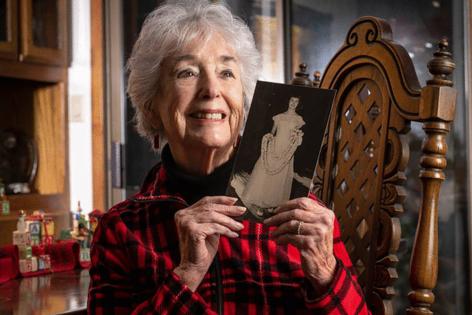 SACRAMENTO, Calif. — Toni Gibson was eating breakfast with her parents in their Honolulu kitchen when she heard the noise. She was only 10, but she turned to her father and said, “It sounds like a bomb.”

It was just before 8 a.m. on Dec. 7, 1941, and one of her parents switched on the small radio that sat on their kitchen counter. The Hawaii Calls announcer confirmed the little girl’s fears: This was no exercise. Pearl Harbor was under attack.

Toni’s father, Frank Gibson, worked for the Dole pineapple company, and he was called in to the factory to help put out a reported fire. The child and her mother, Helene, stayed in the house all day, terrified. The rest of the day was a blur of fear.

Not long after Frank returned from the factory, he covered all the windows that looked out onto their lush tropical garden with black tar paper. Toni would find out that 2,335 service members and 68 civilians were killed in the surprise Japanese attack. America was at war.

Eight decades after the attack, Toni Gibson — now Toni Bone of Greenhaven — is among the few Americans with firsthand memories of that “date which will live in infamy.” Dec. 7 would reshape her family and scar her older brother forever.

But at 91, Toni recalled that when she was a child, she couldn’t really process everything that was going on.

“I was 10 years old,” she said. “The ramifications of entering into war were not as they would have been for my parents.”

She liked to go rollerskating with her friends, which was the only time she’d ever wear shoes. She liked to scramble through the forest and swim under a nearby waterfall. Yes, she knew that war was raging in Europe, largely from listening to the news with her parents every night on the big radio in their living room. But that seemed very far away before the explosions started.

Her brother, Frank Jr., who was away at college in Washington state, immediately dropped out and enlisted in the Navy. Little Toni stayed in Hawaii and lived with persistent fear.

Her parents and their friends, she said, were “sure that with the devastation of Pearl Harbor, that the Japanese would invade the islands.”