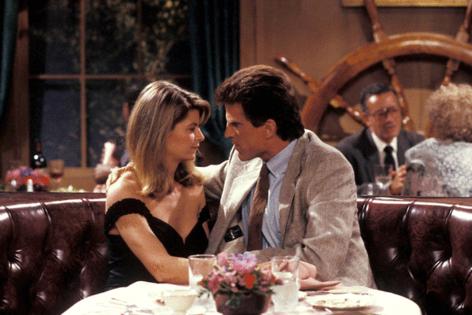 “She was surrounded by her closest family and fought with great strength, leaving us with a certainty of her never-ending joy of living and whatever adventures lie ahead,” said the statement shared on Alley’s social media.

Her family thanked doctors and nurses at the Florida-based Moffitt Cancer Center.

Alley, a Kansas native, rose to fame after taking over the female lead on “Cheers” in 1987 after the departure of Shelley Long and her character, Diane Chambers.

The much-beloved sitcom not only survived but thrived after the cast shake-up, with Alley’s character, Rebecca Howe, as the new manager of the show’s titular bar.

In 1989, Alley teamed with John Travolta and director Amy Heckerling in one of the year’s biggest and perhaps most surprising smashes, “Look Who’s Talking,” which earned nearly $140 million at the domestic box office.

Alley was a show-business natural who resisted the urge to go into the industry until she was well into her 20s, according to an Aug. 20, 1987, Los Angeles Times article about her joining the cast of “Cheers.”

She worked as an interior decorator in Wichita until she packed up and drove to Hollywood one day in 1981 “on an impulse.” Six months later, she was making her feature film debut in “Star Trek: The Motion Picture.”

“I’d always wanted to be a star,” she said at the time. “I’m from an ordinary middle-class family in Kansas. When I was 5 I announced I wanted to be an actress. They laughed. I thought to myself, ‘I will, I will, I will — and when you least expect it!’”

At the time she moved to Hollywood, she said, she knew one person in California, who did not work in entertainment.

“I figured if you went in and auditioned and were good they would hire you,” Alley said. “Isn’t that ridiculous?”

But the parts came in.

The actor claimed she was “blackballed” from the industry after voting for Donald Trump in the 2016 presidential election.

“On Twitter I had many celebrities follow me and now I think three follow me,” she told Fox News’ Tucker Carlson in 2021. “I’m the same person. I’m the girl who voted for Obama, twice. And I’m like, ‘Oh, so you liked me when I voted for Obama, and now you’re this?’ And it’s made me have to rethink, weirdly, my whole friendships, all my friendships.”