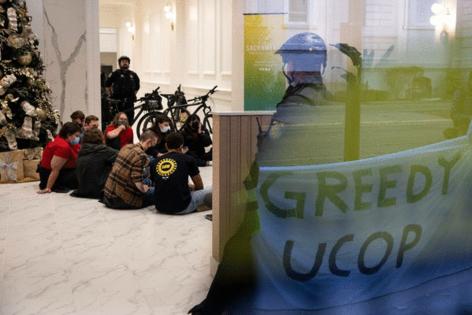 SACRAMENTO, Calif. — A group of striking University of California workers held a sit-in Monday at a downtown Sacramento building, where police officers surrounded them for a few hours before citing them for trespassing.

The workers are demanding that UC administration officials resume bargaining in negotiations with a union representing about 48,000 academic worker. The strike is in its fourth week.

The sit-in coincided with a march on the building, the UC Center Sacramento at 1130 K Street. The center is a teaching, research and public-service site operated by UC Davis that offers an academic program in public policy to students from throughout the UC system.

Most of the workers gathered with picket signs outside the building. Seventeen workers, including some from UC Davis and UC Berkeley, made their way into the building, holding a sit-in as Sacramento police officers surrounded the demonstration inside the lobby.

“It’s shameful that it has to come to this point,” said Elias Bunting, 24, who was one of the 17 workers who participated in the sit-in and were cited for trespassing. “It’s not like we asked for a higher wage yesterday and today we’re out here getting arrested. Some of us have been asking for a fair wage for over a year.”

Bunting is a first-year doctoral candidate in plant pathology at UC Davis. He said the academic workers pushed their way into the locked building about 1 p.m. after one of them posed as a delivery person with packages.

As Bunting went in through the doors, the building’s lone security guard grabbed him by the back of the neck and started hitting him, he said. Bunting pointed to a bloodied bandage on his knee, saying the security guard had injured him.

The labor union representing the student research workers organized demonstrations on Monday, including sit-ins and marches throughout California.

“Our goal is to make UC a more just, equitable place to work, and we’re not willing to let UC call it quits before we’ve made further progress toward that goal,” Rafael Jaime, president of UAW Local 2865, said in a news release. “The leaders of this university need to ensure that negotiations continue so that we can reach fair agreements and return to teaching and research with dignified wages and working conditions. The strike continues.”

Ryan King, associate director of media relations for the UC Office of the President, said on Monday evening the proposals the UC has made to the UAW are “fair, reasonable and honor the important contributions these bargaining unit members make toward UC’s mission of education and research.” He said the UC’s bargaining team has met daily with union representatives, except for the four-day Thanksgiving holiday weekend, to reach an agreement.