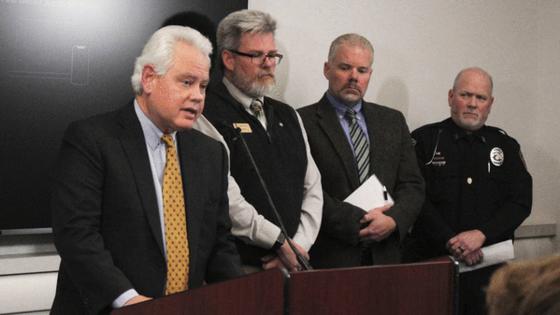 BOISE, Idaho — Three weeks after the four University of Idaho students were found stabbed to death in a house near campus, police still have not identified a suspect in the homicides and some victims’ family members appear to have grown increasingly frustrated.

The four victims were U of I seniors Madison Mogen, 21, of Coeur d’Alene, and Kaylee Goncalves, 21, of Rathdrum; junior Xana Kernodle, 20, of Post Falls; and freshman Ethan Chapin, 20, of Mount Vernon, Washington.

Police have repeatedly described the crime as “targeted,” but have declined to identify who or what was the target.

Steve Goncalves, father of Kaylee, gave interviews to Fox News saying he believes either his daughter or Mogen were the targets because the “means of death don’t match.” He did not clarify what he meant by that when asked.

Law enforcement tried to clear up speculation by sending out a news release Monday. The Moscow Police Department said it has “not released additional facts to the family or the public,” suggesting that speculation based on comments made by family members may not be accurate.

“The Moscow Police Department is committed to providing information whenever possible but not at the expense of compromising the investigation and prosecution,” the release said.

Detectives are also continuing to investigate what occurred from approximately 9 p.m. Nov. 12 to 1:45 a.m. Nov. 13 when Ethan Chapin and Xana Kernodle were believed to be at a campus fraternity party.

Kernodle’s mother said that she and Kernodle’s father believe the couple may have gone to a bar after the party, according to a NewsNation interview.

Police believe they may have found the incident that led to reports of Goncalves having a stalker.