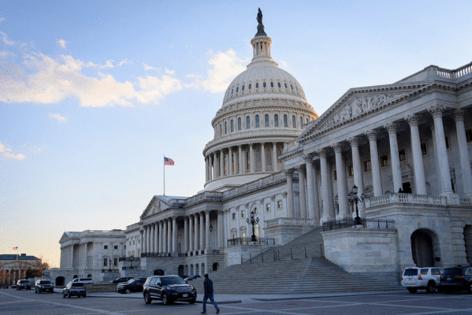 WASHINGTON — Roughly 2 million “Dreamers” would get a path to citizenship in exchange for stronger border security measures under a loose blueprint for an immigration deal circulating among Senate offices.

The proposal by Sens. Kyrsten Sinema, D-Ariz., and Thom Tillis, R-N.C., is still very much in flux, according to a Senate aide and immigrant advocates familiar with the talks.

But it reflects movement toward agreement on a topic where bipartisan consensus is rare at best. And it comes during the lame-duck session that advocates and lawmakers say is likely the last opportunity to pass immigration legislation before Republicans control the House in January.

The agreement would legalize undocumented immigrants brought to the U.S. as children who face uncertain futures in the U.S. amid legal challenges to the Obama-era Deferred Action for Childhood Arrivals program, according to the Senate aide and immigrant advocates. It would also shore up asylum processing at the U.S.-Mexico border.

Republican lawmakers have typically hesitated to legalize any immigrants at a time of historically high border encounters, but lawmakers are considering other elements that could bring them on board — including an extension to Title 42 pandemic-era border expulsions and additional detention beds, immigrant advocates said.

Democrats signaled willingness to compromise on those areas. After trying and failing to include immigration provisions in a party-line budget reconciliation bill last year, Democratic lawmakers acknowledge that they will need to make concessions to bring Republicans on board.

Senate Majority Whip Richard J. Durbin, D-Ill., who chairs the Senate Judiciary Committee and originally wrote legislation to protect Dreamers more than two decades ago, said he has “been in touch with my colleagues and will carefully review their proposal.”

“I am determined to do everything in my power to help deliver a Christmas miracle for Dreamers,” Durbin said.

Immigrant advocates, however, warned they would not support an agreement that banned asylum completely. Under U.S. immigration law, migrants have the right to seek asylum at the country’s borders — though those rights have been paused for many migrants for more than two years under Title 42.

Sergio Gonzalez, executive director of the advocacy group Immigration Hub, said his organization was “deeply concerned” by some measures under consideration.

“We are greatly troubled by the inclusion of mandatory detention, the expansion of Title 42, and the harsh penalties for those who miss an asylum hearing,” Gonzalez said in a news release. “We recognize that any bipartisan process is likely to include measures we would not support on their own, but we call on Senators to fashion a final proposal that gets the balance right.”

With Republicans poised to control the House in January, Democrats have only weeks to advance immigration legislation while they still control both chambers.

Any agreement would likely need to be attached to an omnibus spending agreement or continuous funding resolution rather than moving it as a stand-alone bill.

“We’re talking about it,” Tillis said last week. “You know, we have a very limited runway and a big plane to land.”

(Suzanne Monyak contributed to this report.)