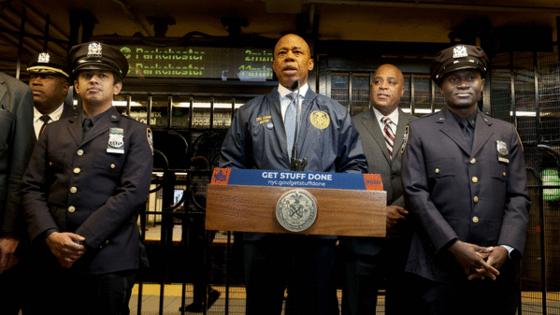 Detractors of Adams’ plan, which he announced last Tuesday, argue there aren’t enough hospital beds set aside for psychiatric patients to accommodate the proposal and that this shortage of beds will create a revolving door where police detain the mentally ill and bring them to hospitals for care, only to see them released without their problems being fully addressed.

On Monday, Adams pushed back on that contention, saying his announcement has produced “creative energy” that’s led to new ideas flowing to City Hall from around the country. Adams’ new policy seeks to clarify a state law that allows the government to involuntarily remove from public mentally ill people who are a potential threat to themselves or others.

“The starting point was for us to say we’re not accepting this anymore,” Adams said. “And now we’re getting professionals all over the country who are reaching out to us to say we want to help. We believe there are some real solutions to deal with the bed issues, there’s some real solutions to deal with the hospitals. And we’re going to start implementing and rolling those out. We know this is a Herculean task.”

During his remarks Monday, Adams also took a shot at the way the media has covered his announcement, referring specifically to the Daily News front page with the headline “Deeply Flawed,” a reference to criticisms he’s received from first responders.

“I’ve been looking at some of the coverage — particularly the front page I saw the other day that said “flawed.” Let me tell you what’s flawed — flawed is a city that walks past people who you know cannot take care of their basic needs and they are a danger to themselves,” he said at an unrelated City Hall press conference.

“I didn’t become mayor to climb a hill. I became mayor to climb a mountain. This is a mountain that I’m climbing. You all know it. You cover these stories. I don’t why y’all acting like you don’t know it. There are too many people on our streets that are not capable of taking care of their basic needs.”

Part of Adams’ climb when it comes to treating the mentally ill who refuse treatment will involve enlisting private hospitals as well as the city’s Health + Hospitals network of medical centers, he said.

But health care industry sources and people who work at private hospitals said last week that they hadn’t received any instructions from the Adams administration prior to and immediately after his announcement last week.

Kenneth E. Raske, president of the Greater New York Hospital Association, which represents hospitals in the city and region, said his group backs Adams’ initiative, but would not commit to a specific number of psych beds to tackle the problem that the policy aims to solve.

“We are going to work steadfastly with this administration to make this a reality,” Raske said. “Of course there are hurdles. There’s hurdles in everything. Those hurdles could be reimbursement issues, expansion of capacity, what have you. Right now, I told the mayor this morning that we are very much committed to his initiative. And, by George, we’re going to make it work.”

Raske declined to quantify the number of beds that his hospital members would set aside for the mayor’s plan.

“You can’t do that," he said. “Psychiatric problems are episodic issues so you can’t just allocate beds.”

During the pandemic, hospitals cut the number of psych beds to care for COVID patients. Raske said the psych beds are now being restored, but some healthcare workers have described that process as slow-going.

“The expansion is occurring,” Raske said. “But, will we have to wrestle with other hurdles? The answer is absolutely, yes, we will, but we will clear those hurdles.”