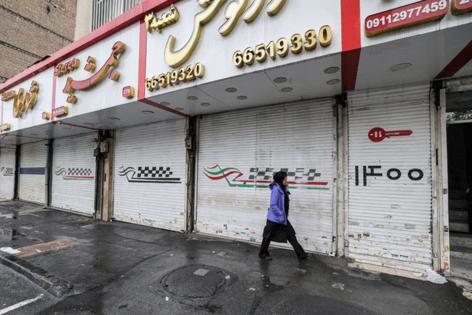 Businesses in some parts of Iran went on strike on Monday as part of anti-government protests, even as the Islamic Republic vowed to implement harsh sentences on people demonstrating, including the death penalty.

Footage shared on social media showed entire streets of shops shuttered in parts of the capital, Tehran, and the cities of Arak, Bushehr, Kermanshah, Shiraz and parts of Esfahan. None of the videos could be verified by Bloomberg.

The strikes come after a top Iranian official acknowledged that the operations of Iran’s “morality police” had effectively been suspended after months of widespread anti-government protests over the death of a young woman in its custody.

A number of people arrested during demonstrations and charged with serious crimes will have their sentences carried out “soon”, the head of Iran’s judiciary Gholam-Hossein Mohseni Ejei, said Monday, according to comments published in the leading moderate newspaper, Shargh. The sentences include execution.

It wasn’t immediately clear from his comments whether prisoners formally sentenced to be executed would have any remaining right to appeal.

Iran’s use of the death penalty has been condemned by the United Nations and drawn criticism from rights groups. London-based Amnesty International has said at least 28 people in prison currently face execution for taking part in the protests, including three children.

According to rights groups, more than 400 people have been killed by security forces in the uprising, including scores of minors. The UN said last month that more than 14,000 people have so far been arrested for taking part.

The latest three-day strike action comes as the protests have lost intensity over the past two weeks. According to reports by human rights groups, security forces continue to target demonstrators, especially in more restive areas such as Iran’s western Kurdish provinces and the southeastern province of Sistan-Baluchestan.

Authorities have also started to forcibly shut down businesses that have publicly declared support for the strikes, including a restaurant and jewelry shop owned by retired Iranian footballer Ali Daei.

(With assistance from Arsalan Shahla.)