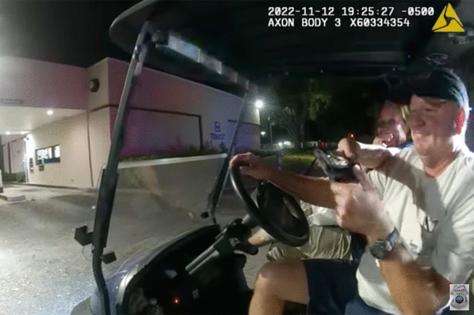 TAMPA, Fla. — Tampa police Chief Mary O’Connor resigned Monday effective immediately after an investigation into a Pinellas County traffic stop where she flashed a badge and asked a deputy to “just let us go.”

Mayor Jane Castor asked for and received the resignation, Castor announced Monday in a news release. An internal review by the department’s Professional Standards Bureau found that O’Connor violated the department regulations on “standard of conduct” and “abuse of position or identification,” according to a disposition letter released along with Castor’s announcement.

“The Tampa Police Department has a code of conduct that includes high standards for ethical and professional behavior that apply to every member of our police force,” Castor said in a statement. “As the Chief of Police, you are not only to abide by and enforce those standards but to also lead by example. That clearly did not happen in this case.

“This is especially disappointing because I gave Mary O’Connor a second chance, as I believe in second chances for people. Which is one of the reasons that the disappointment today runs so deep,” Castor went on. “I had high hope for Chief O’Connor, as she was off to such a strong start by reducing violent gun crime, proactively engaging with our community and focusing on officer wellness. But these accomplishments pale in comparison to the priority I place on integrity.”

“Chief O’Connor used her official position and her badge for obtaining privileges, not otherwise available, in an attempt to avoid the issuance of a traffic citation,” Bercaw wrote to Castor in the disposition letter summarizing the findings of the internal review. “These actions comprised (sic) the professionalism, ethics, of the Police Chief and the City of Tampa.”

Castor announced Friday that O’Connor had been placed on administrative leave pending the outcome of an investigation into the incident.

In a one-page resignation letter to Castor, O’Connor, who was tapped for the job on Feb. 8, said she was resigning “with great sadness.”

“I would never want my personal mistake to stand in the way of the progress I have made in mending relationships between the police department and the community, so for that reason, I am resigning,” O’Connor wrote.

Body camera video released Thursday shows O’Connor identifying herself to a Pinellas County sheriff’s deputy as Tampa’s chief, pulling out her badge and asking the deputy to “just let us go” after she and her husband were pulled over in a golf cart in Oldsmar on Nov. 12. The deputy, who pulled over the O’Connors because the cart did not have a license plate, let them go without a citation.