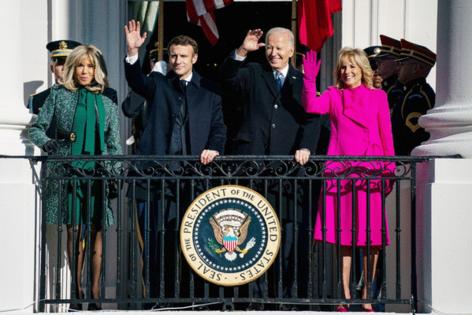 "The United States makes no apology and I make no apology since I wrote the legislation we're talking about," Biden said Thursday during a White House news conference with French President Emmanuel Macron. "There are tweaks that we can make that fundamentally make it easier for European countries to participate and/or be on their own."

The president welcomed Macron for a diplomatic spectacle that featured a 21-gun salute during a morning ceremony and a glittering evening gala for more than 300 people on the South Lawn of the White House. Macron is the first foreign leader to make an official state visit to the U.S. since the Centers for Disease Control and Prevention loosened COVID-19 pandemic restrictions in August.

But before Biden and Macron sat down for Maine lobster and an American wine-and-cheese pairing, the two presidents tried to sort through the biggest challenges facing Washington's oldest alliance, including ensuring continued European support for the war in Ukraine, managing competition between U.S. and China on trade and security, containing Iran's nuclear ambitions and addressing the brewing trade tensions over Biden's Inflation Reduction Act.

The law includes $369 billion in clean energy subsidies and encourages Americans to buy electric vehicles made in North America, a provision that has rankled European leaders who say it will hurt their economies, which are already reeling from the pandemic and Russia's invasion of Ukraine.

White House officials argue the climate law is designed to help the U.S. meet its climate goals and benefits the global green energy industry. National Security Council spokesman John Kirby on Wednesday acknowledged European concerns with the legislation but said it "sets the groundwork" for global investment opportunities in clean energy technology and initiatives that benefit everyone.

Since his arrival in Washington on Tuesday, Macron has made clear he doesn't share that view. The French president sharply criticized Biden's "Buy American" policies at a congressional luncheon and speech at the French Embassy on Wednesday, arguing the climate measure and a bill to boost domestic production of semiconductors would "fragment the West."

Macron struck a more conciliatory tone during Thursday's news conference, telling reporters he understood the U.S. couldn't pass legislation to deal with Europe's problems. Both leaders, he said, had agreed to align their approach to clean energy to ensure the climate bill doesn't damage European economies.

Biden has staked his presidential legacy on reviving American leadership abroad. But he remains constrained by domestic challenges at home, including record-high inflation and supply chain disruptions exacerbated by the pandemic and war with Ukraine. Because of those pressures, Biden is reluctant to back away from what Macron and other European officials view as protectionist policies.