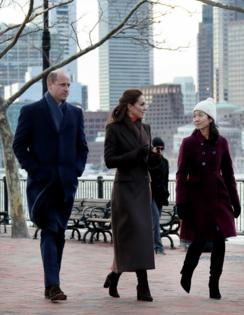 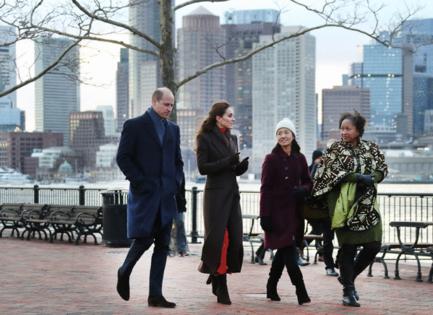 BOSTON — The royals spent a busy trundling around the Boston area on Thursday, greeting well-dressed children and spending a remarkable amount of time looking at East Boston seawalls in the freezing cold ahead of the “green carpet” Earthshot award ceremony Friday.

This was day two of three of the swing Prince William and Princess Kate of Wales are taking through the Hub. The Brits brought pouring rain and whipping winds for their Wednesday introduction at City Hall before Thursday morning departing from the Four Seasons hotel on the Common to hit up organizations in a couple of British-named cities — Chelsea and Somerville.

In Somerville, in keeping with the environmental themes of their voyage, they hit up Greentown Labs, where various sustainable initiatives are under way. The royals had the chance to see, among other things, some soap made out of fungus, per the pool report, before stopping to chat with 8-year-old Henry Dynov-Teixeira, who was wearing a Kings Guard costume and carrying flowers for Kate.

Then it was to Chelsea, where they talked about programs for at-risk youth and police mental health at Roca. They spoke to people including Robert Foxworth, a now-exonerated Boston man who’s accusing a now-on-leave Suffolk County prosecutor of misconduct in his wrongful conviction.

And then it was back to Will’s and Kate’s now old buddy Boston Mayor Michelle Wu, who spoke beside them in a soggy press conference at City Hall on Wednesday and introduced them to her kids, husband and father-in-law.

Wu and the prince and princess trotted around Piers Park in East Boston for a jarringly long time, given the gelid wind howling off of the ocean on the cold afternoon.

Massachusetts Port Authority honcho Lisa Weiland talked animatedly to the crew, pointing at the edges of the park, which, as the name might suggest, is on a pier on the Eastie waterfront. The park, on land owned by Massport, will expand down the shoreline over a total of eight acres and a second pier in the coming years.

Looking across the Harbor at downtown, it’s a beautiful setting — in July or so, when the temps aren’t, as the Brits would say, well below zero centigrade.

Will and Kate, as is their wont, quickly skedaddled as the event ended, but Wu stuck around to take some questions from the press about what she characterized as a “chilly but important” chat about climate resiliency, a topic that’s near and dear both to Wu and the royal couple.

Wu said the pair is “delightful and generous with their time,” and this whole thing “has been an opportunity to highlight all of Boston’s work in the many, many different sectors of progress from our public sector and business leadership and nonprofits.”

On Friday, they’ll all hit the “green carpet” on their way into the Earthshot prize for climate innovations, a Prince William initiative modeled after former President John F. Kennedy’s “moonshot.” In that vein, they’re hitting up the JFK Library in Dorchester on Friday before the Fenway-area ceremony. President Biden is also in town.