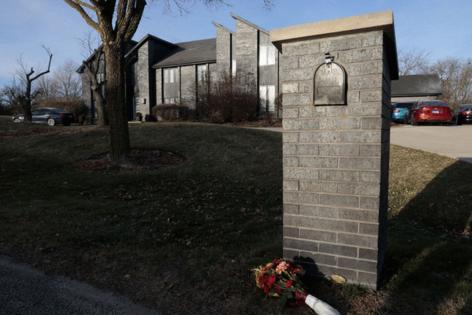 CHICAGO — Officials released the names Thursday of the two children and three adults found dead with sharp-force injuries after a “domestic-related incident” in Buffalo Grove this week, as court records painted a picture of a turbulent divorce and financial issues for the couple in the home.

Neighbors remained stunned by the apparent killings, though police shared few details about the deaths in the Acacia Terrace house that officers had forced their way into Wednesday before making the gruesome discovery.

An animal was also found dead at the home, Buffalo Grove Police Chief Brian Budds said at the news conference. There were no survivors, he added.

“Today is a very sad day for our community as we continue to process this unthinkable event,” Budds said.

A co-worker of Vera Kisliak had requested the well-being check, police said. The department will continue to investigate the deaths and share more information in coming days, Budds said.

Court records reveal that the family faced foreclosure and a contentious, ongoing divorce. Both Vera and Andrei Kisliak filed for divorce on July 8, records show. The last proceeding for their divorce was held Tuesday.

Andrei Kisliak was also charged with criminal contempt of court on Sept. 14. He was scheduled to go to court again Dec. 12 after Deerfield police cited him for littering in early October. He had filed for an order of protection against Vera Kisliak in August, but his petition was denied.

On Nov. 9, mortgage lender Home Point Financial Corp. opened a foreclosure case on the Kisliak family’s 2830 Acacia Terrace home. The company alleged it had received no mortgage payments since July 2020, according to court records.