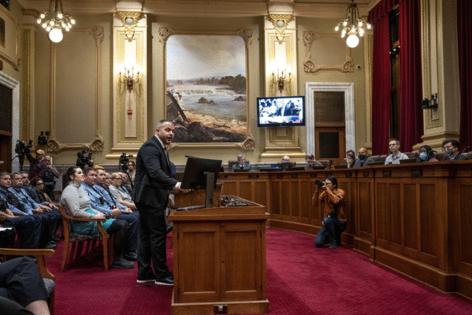 MINNEAPOLIS — Despite a barrage of criticism for a proposal to revamp civilian oversight of the Minneapolis Police Department, a City Council committee narrowly approved the ordinance Wednesday with several modifications.

The current oversight structure "wasn't good enough," said Council Vice President Linea Palmisano at a public hearing in the council chambers. "We get that. Our city deserves more. This is our attempt to do better."

Palmisano joined colleagues Michael Rainville and LaTrisha Vetaw, chair of the Public Health and Safety Committee, in a 3-2 vote approving the measure and rejecting a motion by Council member Robin Wonsley that sought more time to make changes and get community input.

Only Council member Elliott Payne, the committee's vice chair, supported Wonsley's motion, which failed along with several motions by Payne to amend the ordinance.

"We have folks in the community who have been deeply hurt by MPD officers and by our city's failure to hold them accountable," Wonsley said. "It is completely unfair to be asked to respond to something so substantive in just a few days."

The proposed ordinance would replace the current oversight structure with the Community Commission on Police Oversight, consisting of 15 civilian members. The ordinance, drafted by the Minneapolis Civil Rights Department in collaboration with the city attorney's office, is expected to be introduced by Council President Andrea Jenkins and voted on by the full council on Dec. 8.

Under the proposal, all commission members would have the chance to sit on smaller review panels to consider citizen complaints against police and recommend changes in police policies and procedures.

Responding to some of the feedback the council has received, Palmisano proposed several changes that the committee adopted on 3-2 votes. One would increase the review panels from four to five members, with three civilians and two police personnel — replacing the current structure of two civilian members and two from the police. The panel would make recommendations to the police chief, who would decide whether to issue discipline.

But many critics believe the panels should consist entirely of civilians, including some of the 15 citizens who spoke against the proposal at Wednesday's committee meeting. Only one person spoke in favor of it.

A number of people at the meeting held signs urging the committee to reject the proposal, including Michelle Gross, president of local activist group Communities United Against Police Brutality, or CUAPB.

"Based on past experience, we don't trust the city to cooperate with the new body in terms of approving enough members, providing it with information or listening to its recommendations," Dave Bicking, a CUAPB board member, told council members. "That is, unless the city can keep the new body weak, dependent on the mayor, the council, and the staff, and disconnected from the public." He added that the proposed ordinance "makes it abundantly clear that the intent of the authors is to do just that."

Several critics on Wednesday said the oversight panel should be entirely independent of city leaders and chosen by popular vote. "The members should be elected, not selected," said Rhea Smykalski during the hearing.

Gross said after the meeting that CUAPB plans to lobby other City Council members in hopes of defeating the ordinance next week. "It's poorly written, it takes power away from the community," she said.

The two officials, after rolling...Read More

Following years of pleadings from the autonomous vehicle industry, California officials are revisiting a statewide policy that prohibits self-driving semi-trucks and big rigs on its roads.

MEMPHIS, Tenn. — The city of Memphis released nearly an hour of graphic video Friday evening showing the beating of Tyre Nichols, footage capturing the blow by blow of a traffic stop that spiraled into a savage display ...Read More

ATLANTA — The chief of Memphis’ police department had a lengthy career in Atlanta that nearly ended with her 2008 firing in connection with a botched investigation involving the husband of a police sergeant.