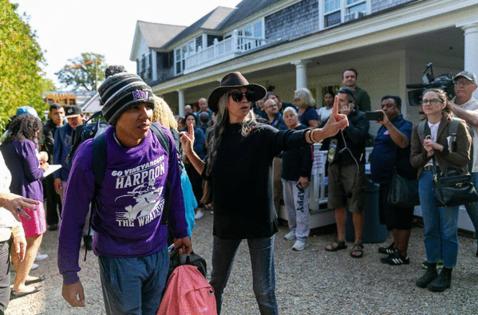 TALLAHASSEE, Fla. — A public records watchdog on Wednesday asked a Tallahassee judge to charge the DeSantis administration with contempt of court for continuing to withhold public records about its handling of the relocation of migrants from Texas to Martha’s Vineyard in September.

The Florida Center for Government Accountability asked Judge J. Lee Marsh of the 2nd Judicial District to hold the governor’s office in contempt for violating Florida’s Public Records Act after the judge ordered the state on Oct. 25 to turn over by Nov. 14 text messages, call logs and other communications for his chief of staff James Uthmeier about the migrant flights.

The motion is the latest in a growing array of legal challenges facing the DeSantis administration over its use of $1.56 million in Florida taxpayer funds earmarked for relocating “unauthorized aliens” from Florida but which was instead was used to relocate 49 migrants from Texas.

On Tuesday, lawyers handling a class-action lawsuit filed against DeSantis over the migrant flights to Martha’s Vineyard, amended their complaint to include as defendants Uthmeier, the governor’s “public safety czar” Larry Keefe and Florida Transportation Secretary James Perdue. They are all being accused of working together with others to “deceive” migrants who were flown to the Massachusetts island and promised jobs.

On Tuesday, during a hearing in another lawsuit brought by the Florida Center for Government Accountability, the head of the company hired by the state to conduct the migrant flight operation, Vertol Systems Company, testified that he had not turned over any of his text messages to any of the many organizations that have made public records requests of his communications regarding the flights.

During the court hearing before Leon County Circuit Court Judge Angela Dempsey, James Montgomerie, CEO of the Destin-based company, admitted he had not turned over any of his text messages as part of any public records request. He also testified that although Vertol hired a subcontractor to fly the migrants from San Antonio to Martha’s Vineyard, FDOT did not approve the subcontractor as required by law.

In his Oct. 25 order, Marsh rejected the argument made in court by DeSantis’ attorneys who argued that phone and text logs on a private cellphone are not a public record. In his order, the judge cited state law that defines a public record as any record “regardless of the physical form” made “in connection with the transaction of official business.”

He said the governor’s office’s “partial production and response to the record request were unreasonable” and ordered the state to pay the center’s attorneys fees.

Marsh also ordered the governor’s aide in charge of the migrant flight operation, Keefe, to turn over his communications records.

The center is asking a judge to order Uthmeier to turn over his text messages and call logs from his private cellphone from Sept. 1 through Sept. 15, redact any portion the state contends is not a public record and allow the judge to review the redacted portion. It also wants the judge to schedule a hearing and allow Keefe to be deposed to answer questions about his communications with Montgomerie. Keefe, the former U.S. attorney for the Northern District of Florida, used to represent Montgomerie’s company when Keefe was a lawyer in private practice.

“Records cannot be hidden by conducting public business on private cellphones and encrypted apps. Judge Marsh’s order must be enforced. No individual is above the law,’’ said Michael Barfield, director of public access for the Florida Center for Government Accountability.

Uthmeier’s text messages have been produced as part of a records request in a lawsuit against DeSantis by ousted Hillsborough County State Attorney Andrew Warren.

“I know you’re just trying to help, but the boss is not pleased with the sensationalism of this overly legal proceeding,” Uthmeier texted Lamb.