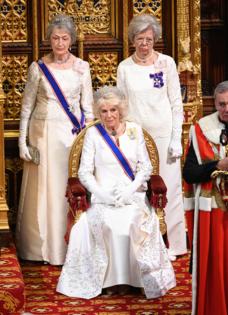 A Buckingham Palace official has stepped down from her royal duties following “unacceptable” remarks she made to a Black VIP guest.

Lady Susan Hussey, the 83-year-old godmother of Prince William, resigned after questioning Ngozi Fulani about her nationality during a reception hosted by the Queen Consort on Tuesday in London.

Fulani, a domestic and sexual abuse victims’ advocate, blasted the British noblewoman on social media, calling the exchange a “violation.”

The Sistah Space chief executive shared a play-by-play on Twitter of how Hussey, to whom she refers as "Lady SH," approached her, moved her hair to see her name badge and asked her “what part of Africa are you from?”

Despite Fulani explaining that she is British, Hussey allegedly said: “No, but where do you really come from, where do your people come from?”

“Oh, I can see I am going to have a challenge getting you to say where you’re from,” she badgered. “When did you first come here?”

Fulani obliged her throughout the brief exchange, explaining that she is a “British national” and her parents came to the country in the 1950s, before Hussey cut her off, saying: “Oh, I knew we’d get there in the end, you’re Caribbean!”

The palace described the remarks as “unacceptable and deeply regrettable,” the BBC reported.

Prince William’s spokesperson said “racism has no place in our society” in a statement. “The comments were unacceptable, and it is right that the individual has stepped aside with immediate effect.”

The Baroness Hussey of North Bradley, Hussey was a close confidante of Queen Elizabeth II, who served as her lady-in-waiting.

Fulani thanked supporters Wednesday on Twitter, stating that while she didn’t wish to reveal the person, it is “the system that needs to be revised.”