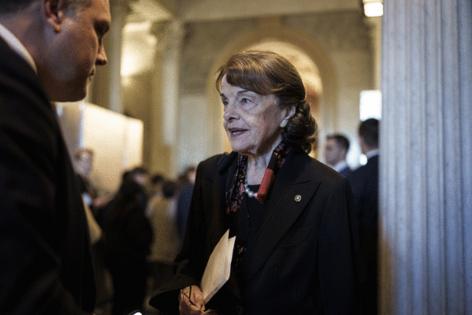 WASHINGTON — A Senate bill protecting same-sex marriage cleared another procedural hurdle on Monday night, with passage of the legislation expected on Tuesday.

The 61-35 vote allows the Senate to move ahead with an amendment to the measure that ensures it doesn’t infringe on religious rights and protections.

The Respect for Marriage Act would federally recognize same-sex marriages and ensure benefits for all married couples.

A unanimous consent agreement was reached for a Tuesday afternoon vote on final passage that would take place after votes on three amendments from Republican Senators Mike Lee of Utah, Marco Rubio of Florida and James Lankford of Oklahoma.

The U.S. House passed its version in July, but if the Senate approves the revised bill, the House would have to vote again on the measure.

The Respect for Marriage Act, sponsored by Democrats Dianne Feinstein of California and Tammy Baldwin of Wisconsin, and Susan Collins, a Maine Republican, would repeal the 1996 Defense of Marriage Act which defined marriage as between a man and a woman under federal law. That law was struck down by the 2015 Supreme Court ruling in Obergefell v. Hodges, which requires all states to grant and recognize.

Democrats say the new bill is necessary protect the rights of same-sex couples following the Supreme Court’s decision earlier this year to overturn the 1973 Roe v. Wade decision establishing a constitutional right to abortion. Justice Clarence Thomas wrote in his concurring opinion that the court should review other “due process precedents” including the Obergefell v. Hodges ruling.