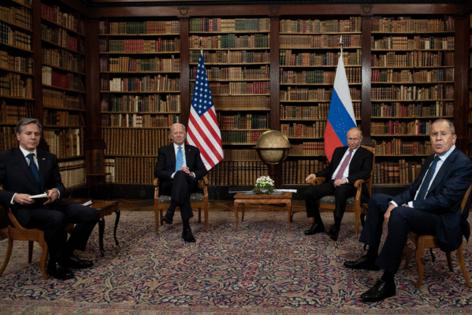 Russia and the U.S. put off a new round of talks under the New START treaty this week, in what would have been the first such discussions since the Russian invasion of Ukraine in February.

Russia’s foreign ministry said the commission that handles implementation of the 2011 treaty will meet at a later date, according to state-run Tass. It gave no reason for the delay. A State Department spokesperson, commenting on customary condition of anonymity, said Russia had postponed the meeting, and the U.S. was ready to reschedule at the earliest possible time.

Resuming suspended inspections was to be among the possible agenda items for the Nov. 29 meeting, but Russian officials had played down hopes of a deal.

Russia barred U.S. inspectors from its nuclear weapons sites in August, citing visa and travel restrictions for Russians imposed after the invasion. The two countries had suspended on-site inspections in March 2020 because of the COVID-19 pandemic and were discussing how to restart them safely.

While the U.S. has cut off most dialogue with Russia over the invasion, some channels remain open. Central Intelligence Agency Director Williams Burns in mid-November met in Ankara with Russian foreign intelligence chief Sergei Naryshkin, reiterating Washington’s warnings to Moscow not to use nuclear weapons in Ukraine.

Russian President Vladimir Putin and President Joe Biden extended the New START treaty for five years in 2021, giving the former Cold War rivals time for new talks on strategic security. The commission that was to meet in Cairo last convened in Geneva in October 2021. Russia no longer considers Switzerland a neutral location for such negotiations after it joined U.S.-led sanctions over Ukraine.