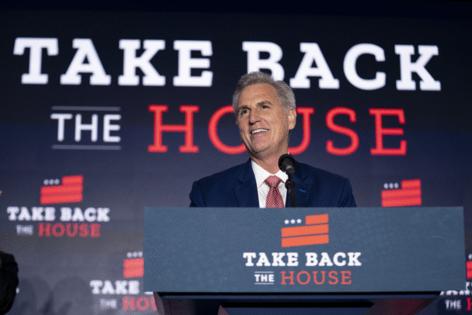 WASHINGTON — Republicans and their longtime corporate allies are going through a messy breakup as companies’ equality and climate goals run headlong into a GOP movement exploiting social and cultural issues to fire up conservatives.

The ensuing drama will unfold over the next two years in the U.S. House, where the incoming GOP majority plans to pressure companies on immigration, equality and climate change stances that are now being assailed by key Republicans as “woke capitalism.”

Most directly in the GOP cross-hairs is the U.S. Chamber of Commerce, which is under pressure from likely House Speaker Kevin McCarthy to replace its leadership after the nation’s biggest business lobby backed some Democratic candidates.

As the conflict simmers, the California Republican and his top lieutenant, Steve Scalise, have refused to meet with Chamber representatives, according to a person familiar with their thinking. And rank-and-file Republicans are largely disregarding the once influential “key vote alerts” the Chamber distributes, a former senior Republican aide said.

The confrontation has spread beyond Washington, with Florida Governor Ron DeSantis building a national brand and possible 2024 presidential campaign on opposition to corporate environment, sustainability and governance investing policies. He has singled out PayPal Holdings Inc. in his battle against ESG and punished Walt Disney Co., which operates its Walt Disney World theme part near Orlando, after it criticized a law limiting school instruction about gender identity and sexual orientation.

Divisions between populist Republicans and big business are rooted in President Donald Trump’s attacks on executives such as General Motors Co. Chief Executive Officer Mary Barra, Merck & Co. Chairman Kenneth C. Frazier, and Amazon.com Inc.’s Jeff Bezos. When companies suspended campaign donations after the Jan. 6 Capitol insurrection to Republicans who denied the result of the 2020 presidential election, the rift widened, even though many businesses have since resumed their giving.

With Trump mounting his third presidential campaign and DeSantis positioning himself as a potential rival, the discord between corporate interests and conservatives threatens to intensify.

Interviews with lawmakers, lobbyists and former congressional aides highlighted the growing tensions with a new crop of Republicans more focused on social and cultural issues than business priorities.

“All of those companies are going to have a hell of a time getting back into the good graces of Republicans,” said John Feehery, a veteran House Republican aide who is now a partner with the lobbying firm EFB Advocacy.

Corporations and their representatives in Washington are meeting with incoming Republicans, typically a friendly formality after an election. Yet some of the sessions aren’t going well this year, according to one lobbyist for a business association who asked not to be identified discussing private conversations.