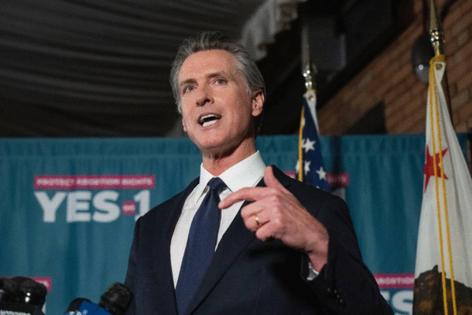 Encouraged by six victories — and zero defeats — in this month’s midterm elections, abortion rights advocates are considering another round of ballot measures in 2024 that would enshrine reproductive freedom in state constitutions.

This time, they’re mostly aiming at states with tight abortion restrictions already on the books, hoping to outflank anti-abortion state lawmakers and courts that are out of step with most residents.

Based on the midterms, the presence of such initiatives on the ballot also could give a boost to Democratic candidates. Contrary to predictions, abortion was the top issue for a large percentage of voters, especially those in states where an abortion measure was on the ballot, according to exit polls.

“They’re starting now, because the process for getting any type of measure on the ballot takes a very long time,” said Kelly Hall, executive director of the Fairness Project, which provides technical assistance on state ballot initiatives.

Abortion rights are particularly well-suited to the ballot measure process, she said, because it gives voters the power to determine how they’ll be governed when elected leaders are out of sync with public opinion.

Nationwide, 6 in 10 Americans say abortion should be legal in all or most cases, according to a June 2022 poll by the Pew Research Center. (The Pew Charitable Trusts funds the center and Stateline.)

In an October poll, 59.1% of Ohioans said they would support an abortion rights amendment to the state constitution. In July, 57% of Floridians said they disagreed with the U.S. Supreme Court’s decision to strike down Roe v. Wade. And even in bright-red Arkansas, a whopping 79% of participants in a poll released earlier this month said abortion should be legal in at least some circumstances.

In recent elections, progressive ballot measures to expand Medicaid to people with low incomes, legalize marijuana use and boost the minimum wage have been successful in both blue and red states.

“Our experience in using ballot measures in conservative states is that when we’re able to take the partisan labels off of certain issues, we can win even in conservative parts of the country, and that’s what we saw happen this year with abortion and reproductive rights,” Hall said.

KANSAS CITY, Mo. — Three teenagers were killed in a crash when a vehicle they were in went airborne and struck a tree, Missouri police say.

The Missouri State Highway Patrol said five people were in the Ford Focus that ...Read More