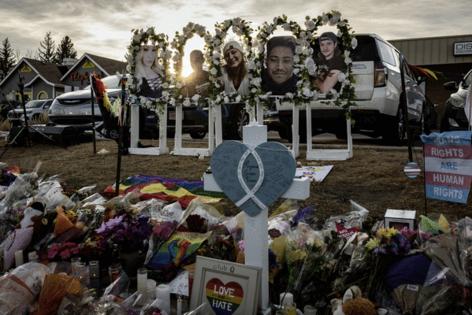 COLORADO SPRINGS, Colo. — Last weekend's tragedy at Club Q, when an attacker killed two bartenders and three customers and shot 17 others inside the nightclub before two patrons intervened, in several ways united what some view as a divided community.

Differences on religion, politics and sexual orientation and identity seemingly were set aside as grief took over, and thousands of mourners laid flowers and notes near the site, attended memorials and vigils, and donated generously to fundraisers benefiting victims.

The city's willingness to respond to a horrifying situation with compassion, sensitivity and respect might be the catalyst that helps lift the negative perception about Colorado Springs and its attitude toward LGBTQ people that has lingered for three decades, said Sophie Bjork-James, assistant professor of anthropology at Vanderbilt University.

"There's been a lot of people coming out in support of the local queer community," she said, "which I think can make a huge difference."

Bjork-James conducted research on evangelical Christian anti-LGBT bias in Colorado Springs from 2008 to 2016 and last year published a book on the topic, "The Divine Institution: White Evangelicalism's Politics of the Family."

"Moving forward, the entire community — even people who wouldn't want to go to a gay club — is going to have to come out and say, 'We want everyone to feel safe in our community,'" she said. "It takes the majority of the community to show that in their actions."

Whether the stain of a 30-year-old anti-gay rights movement that originated in Colorado Springs and resulted in statewide legislation that prohibited legal protections for sexual orientation will fade remains unclear. An act of vandalism less than a handful of days after the shooting seemed to underscore the tense divide.

A large stone sign at the front of the campus of Focus on the Family, an evangelical Christian communications organization that relocated its headquarters from California to Colorado Springs in 1991, was spray-painted in black overnight Wednesday with the words: "Their blood is on your hands" and "Five lives taken."

Focus President Jim Daly said Friday in a statement that while the organization recognizes the community is hurting in the aftermath of "the reckless and violent actions of a very disturbed individual, this is a time for prayer, grieving and healing, not vandalism and the spreading of hate."

He urged everyone to pray for peace.