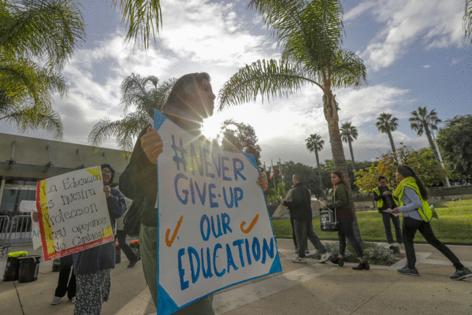 LOS ANGELES — California State University trustees are poised to abandon a proposal to require a fourth year of math-related coursework for admission, ending a plan introduced six years ago that touched off fierce criticism among many who said it would create barriers for students trying to enter the system.

Administrators are recommending the board of trustees reject the proposed requirement in January, citing new research showing that nearly all CSU applicants and enrollees already take four years of math. They also raised concerns that the new requirement would hurt students whose high schools are underresourced or still struggling with the effects of the pandemic on education.

"The CSU does not plan to pursue a change to our admissions requirements," said Nathan Evans, the system's associate vice chancellor of academic and student affairs during a Nov. 15 meeting.

During a discussion about the recommendation, several trustees on the 23-member board indicated they endorsed ditching the proposed requirement but vowed to continue to find ways to help develop students' quantitative reasoning skills once they arrive on campus.

First introduced in 2016, the proposal called for students to take an additional year of math, science or other quantitative reasoning coursework such as computer science or personal finance to qualify for admission into the country's largest four-year system of public higher education.

But dozens of social justice groups, education advocates, school districts and lawmakers from across the state campaigned against the proposal. They argued that it would unfairly prevent Black and Latino students, and those from low-income families, from enrolling in the system because of disparities in access to such classes and the lack of qualified teachers.

Christopher Nellum, executive director of Ed Trust-West, a nonprofit organization focused on education equity, said at the time that the system did not conduct enough research or provide data on how an additional requirement would affect students.

"Just by virtue of their ZIP code, or where they live, or their ability to access a school with the right resources, they may have been shut out of CSU," Nellum said of students. "We wanted the CSU to provide evidence that wasn't going to happen or, if it was going to happen, they had a plan for minimizing impact."

Cal State officials commissioned a study in 2020 with the research firm MDRC to measure how the additional requirement would affect students.