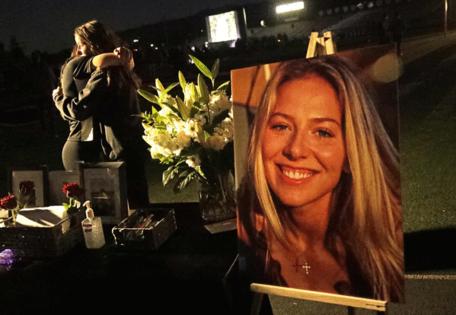 LOS ANGELES — The parents of Katie Meyer have filed a wrongful-death lawsuit against Stanford University months after the 22-year-old soccer captain was found dead in her dorm room.

The complaint, filed Wednesday in Santa Clara County Superior Court, names several university administrators and alleges that a disciplinary letter sent to Meyers on Feb. 28 was a form of "institutional bullying" and caused distress that "impulsively led her to suicide" that night.

"The actions that led to the death of Katie Meyer began and ended with Stanford University," the lawsuit claimed.

Stanford's Office of Community Standards sent Meyer the formal disciplinary charges by email. The five-page letter addressed an August 2021 incident in which she allegedly spilled coffee on a football player while riding her bike.

Meyer believed that he had sexually assaulted a freshman teammate of hers who was a minor at the time.

Though the incident was reported to the university last year, the football player faced no disciplinary actions, the suit claimed, and wasn't dismissed from the team.

Instead, Meyer received a letter after hours and on the last day disciplinary charges could be brought. It outlined her "potential removal" from the university while placing a hold on her degree three months shy of graduation.

That night, she responded with an email that expressed how "shocked and distraught" she was.

The suit further claimed that the university failed to immediately follow up with a wellness check.