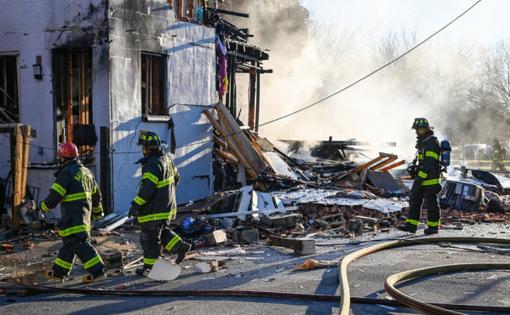 Terry Bagley Sr. was prepping food for Thanksgiving when he realized he needed pasta for the macaroni and cheese.

On his way to the store Tuesday afternoon, everything changed in an instant — when a cry for help and a split-second act of heroism left Bagley fighting for his life.

While the 70-year-old Marine veteran was walking through Pigtown, an explosion rocked the area late Tuesday afternoon, leaving a mother and daughter trapped inside their burning, partially collapsed Bayard Street home across from Carroll Park.

Bagley entered the building and tried to save them, but another part of the house collapsed on him. He remained hospitalized in critical condition Thursday, unable to celebrate the holiday he started cooking for days earlier. Officials said the other two victims had been upgraded to stable condition on Wednesday.

The cause of the explosion is still under investigation, fire spokesperson Chief Roman Clark said. Rattled neighbors told reporters at the scene that Baltimore Gas and Electric had been doing work in the area recently. BGE workers were also present at the explosion site the following day.

Bagley’s daughter, Eris Bagley, said he was placed in a medically induced coma because his injuries are extensive, including a broken pelvis, femur and hand. She said doctors delayed performing surgery Wednesday in hope that his heartbeat would become stronger; they planned to complete the surgery Thursday.

“He lived through polio outbreaks. He survived toxic water at Camp Lejeune. He served in Vietnam, one of the most horrific wars known to America,” Eris Bagley said. “I’m not used to seeing my dad weak.”

But she said his pain is severe; she can see tears in his eyes. She spent hours with him at Shock Trauma on Wednesday, telling him his family was proud of him and everything would be OK.

“We are just praying for the surgeon’s hand and praying that my father is so stubborn he doesn’t want to leave us yet,” she said.

She said family members are worried about how they’ll afford expensive medical bills if insurance doesn’t cover everything.