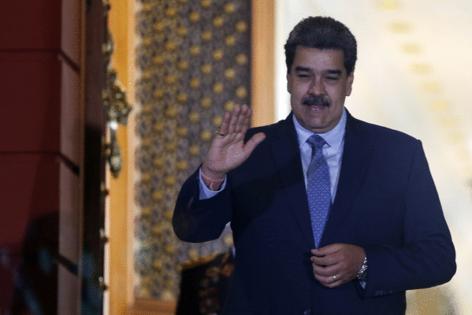 Venezuela’s government and opposition agreed to restart talks this weekend, ending a yearlong standoff and potentially opening the door for the U.S. to ease oil sanctions, according to people familiar with the situation.

President Nicolas Maduro and an opposition coalition will send delegates to Mexico to reopen negotiations starting Nov. 26, according to the people, who asked for anonymity as the process has not been formally announced. The talks will include conditions for Venezuela’s 2024 presidential elections and could unlock $2.7 billion of government funds currently frozen by sanctions, they said.

Colombian President Gustavo Petro said in a post on Twitter that the talks will resume on Nov. 25 and 26. He is not involved in the process, however.

An official announcement is expected as early as Wednesday from the mediator Norway, which will be reinforced by the Venezuelan delegations, the people said. The initial plan is for the parties to meet in Mexico every 15 days.

Norway’s Foreign Affairs Ministry declined to comment on the specifics of negotiations. Neither the government nor spokespeople for the opposition replied to messages seeking comment.

The government of U.S. President Joe Biden has repeatedly said it would reevaluate its sanctions policy if Maduro’s government made political concessions, starting with a return to the Mexico meetings. A first step may be a limited license for Chevron Corp. that would loosen some financial restrictions on the California-based driller’s operations in Venezuela.

The U.S. Treasury is considering granting the oil firm a time-limited license “contingent” on additional “specific commitments” after Maduro and opposition representatives resume their dialog in Mexico, according people who asked not to be identified. It would also prevent PDVSA from receiving profits from the oil sales by Chevron. Any announcement or action would not be taken in response to energy prices, but for Maduro’s government to take the steps needed to support the restoration of democracy in Venezuela, the people said.

Easing of international economic restrictions could help the country begin to pump more oil. Despite having the world’s largest crude reserves, Venezuela’s oil industry has been gutted by years of mismanagement, a lack of investment, and sanctions, which prohibit U.S. companies financial activities in the country.

The symbolic image of the silently meditating nun or chanting monk often embodies the Buddhist religion. Such representation may make it appear that Buddhist teachings and practices are grounded in heterosexual norms. ...Read More

A Missouri man who is deaf and blind said a medical bill he didn’t know existed was sent to debt collections, triggering an 11% rise in his home insurance premiums.

An insurer has suspended a blind woman’s coverage ...Read More

Some booming suburbs, many of them in the Sun Belt, are becoming as racially diverse as major coastal cities — and often with less racial conflict.

Sixty-nine counties, mostly in the South and West, had clear racial ...Read More