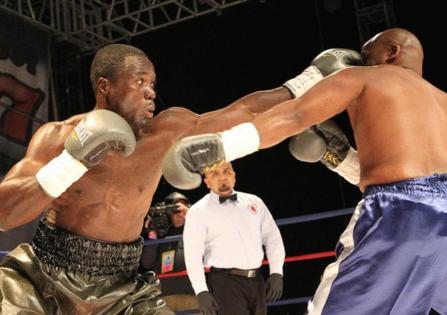 MIAMI — A former professional boxer has been arrested after Miami police say he bought an AK-47 rifle and was preparing to shoot up a gym.

Azea Agustama, 39, of North Miami, was jailed early Wednesday and charged with two felony counts of issuing written threats to commit a mass shooting, and one count of threatening to kill.

Known in boxing as the “Haitian Hitman,” Agustama competed in the 2008 Olympics in China for Haiti, as a light heavyweight. He also notched 18 wins as a professional boxer, often appearing on cards at Casino Miami Jai-Alai and other venues in the mid-2010s.

A judge on Wednesday afternoon ordered Agustama held on a $3 million bond, plus house arrest if he posts the money. An assistant public defender said Agustama has no money, and called the $3 million figure “tantamount to no bond.”

“I believe he poses a great danger to the community,” Circuit Judge Mindy Glazer replied.

According to a police arrest report, Agustama was a personal trainer and had been a member of BOXR Gym, on Northeast First Avenue. But he had his membership revoked and was issued a trespass warning Nov. 11 after he got into an argument with someone at the facility, police said.

The business’ owner, Mateo Attalla, told the Herald that Agustama had only been a member for about four months and got into an argument because a boxing coach needed the space to start a class. “He got a little bit upset he couldn’t finish up his workout,” Attalla said. “He said to the coach, let’s jump in the ring and fight it out.”

The coach didn’t bite, and notified Attalla, who revoked his membership and gave Agustama the money he’d already paid. Agustama left seemingly without any problems.

But on Tuesday, according to the report, Agustama called police saying he wanted to pick up his belongings at the gym. Then, he took to Instagram, posting a photo of the Parkland school mass shooter with a caption saying he “was considering shooting” a slew of people over being kicked out and “saying I touched a girl,” the report said.

Agustama also wrote he was “willing to shoot with a actual gun or bazoka (sic),” the report said. He also sent a picture to one of the people at one gym, saying “he’s first when I get my gun,” the report said.