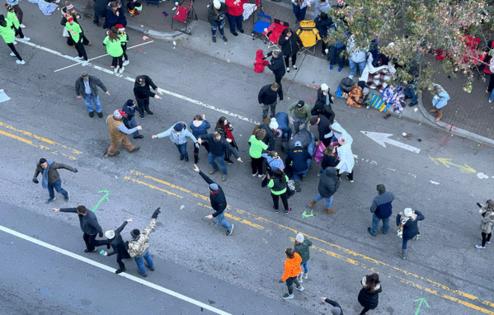 RALEIGH, N.C. — After a train slammed into a Texas veterans’ parade in 2012, killing four people and injuring a dozen more, the National Transportation Safety Board urged local governments to overhaul the protections for parade-goers and participants.

Chief among its recommendations: requiring parade organizers to submit a written safety plan that includes, among its essential components, provisions for driver and vehicle screening.

The city of Raleigh, now grappling with its own parade tragedy, didn’t follow that advice.

Its special event guidelines say event organizers must turn in an emergency action plan. But nowhere in the city’s parade permit ordinance, policy, guidelines or plan template is there any mention of screening drivers or vehicles.

“The City does not set safety guidelines for events of this nature,” spokeswoman Sarah Baker told The News & Observer in response to the newspaper’s request for documents describing the safety standards that applied Saturday’s Christmas parade.

Neither police nor fire officials inspected the vehicles or floats that participated, department spokesmen said.

Police have identified faulty brakes as the “proximate cause of death” for an 11-year-old dancer killed at the parade.

They charged Landen Christopher Glass, a 20-year-old who previously danced with the same troupe, with several misdemeanors and traffic infractions.

Glass, who the warrant says works on car safety systems, towed a float for CC & Co. Dance Complex with a GMC pickup that had several after-market alterations.

He has a lengthy history of driving infractions, including skipped inspections, in his home state of Virginia, The News & Observer previously reported.

LOS ANGELES — Neighbors described a horrifying scene as a man who police say catfished a teenage girl arrived at her family’s home in Riverside on Friday, killing three relatives, and then leaving with her and the home...Read More

BOSTON — Police are now saying they found four dead babies in the South Boston house that drew a huge police presence and accompanying cascade of rumors earlier this month.

Police wrote in an update Monday night — in ...Read More

WASHINGTON — A Senate bill protecting same-sex marriage cleared another procedural hurdle on Monday night, with passage of the legislation expected on Tuesday.

The 61-35 vote allows the Senate to move ahead with an ...Read More

DEARBORN, Mich. — Police have identified one of the women involved in a Sunday shootout with police on the Detroit-Dearborn border and the human remains found in the back of the car, which has been linked to a Tennessee ...Read More

CANBERRA, Australia — Australia’s iconic Great Barrier Reef is once again at risk of being categorized as endangered, after the United Nations reported ongoing threats to the natural wonder including pollution and ...Read More